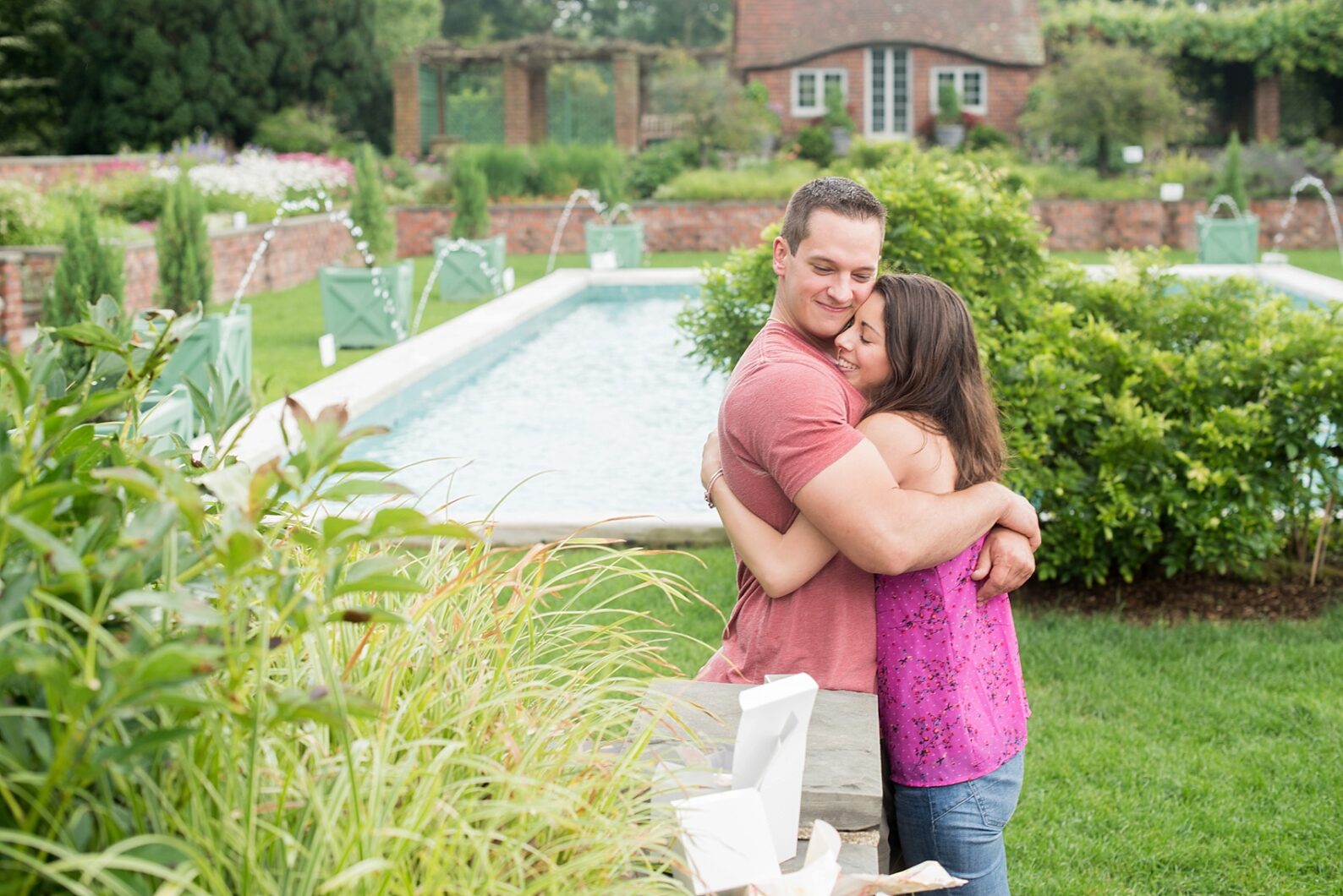 Of all the proposals I have photographed this Long Island Proposal has to be one of my all time favorites…because It is my brother’s and sister-in-law’s story! And I was the lucky one who got to photograph it just two days ago. I have to say this post is a little personal because, well – it’s my fam.

About the Fiances: Zach + Danielle

Danielle and Zach met a few years ago through a mutual friend at the firehouse Zach has volunteered at for years. He’s also in FDNY, but that’s not how they met!  (By the way – they definitely tell this story better than I do.) They’ve been loyal and faithful to each other ever since. Danielle is a nurse and Zach is…a firefighter…and, quite frankly, it’s the cutest pairing since Zack Morris and Kelly Kapowski hooked up on Saved by the Bell. (Okay, technically I don’t think Zack was on the football team but you get my cheerleader/football player reference, right?)

It’s not unusual for Zach, Dani and I to spend time together at least once when I’m around.

Though it’s usually lunch at a Japanese restaurant, it wasn’t suspicious for Zach and me to suggest Old Westbury Gardens for a Tuesday afternoon activity because Danielle and I like doing that kind of stuff and seeing new things. (Edit: Danielle and I like that. Zach goes to make Dani happy. But I’m glad she gets him out of the house when he’s not working.)

Above is a photo of a very unsuspecting Danielle. Again, not unusual for 1) all three of us to get together and 2) for me to have my camera on me. I’m a photographer! It’s what I do. 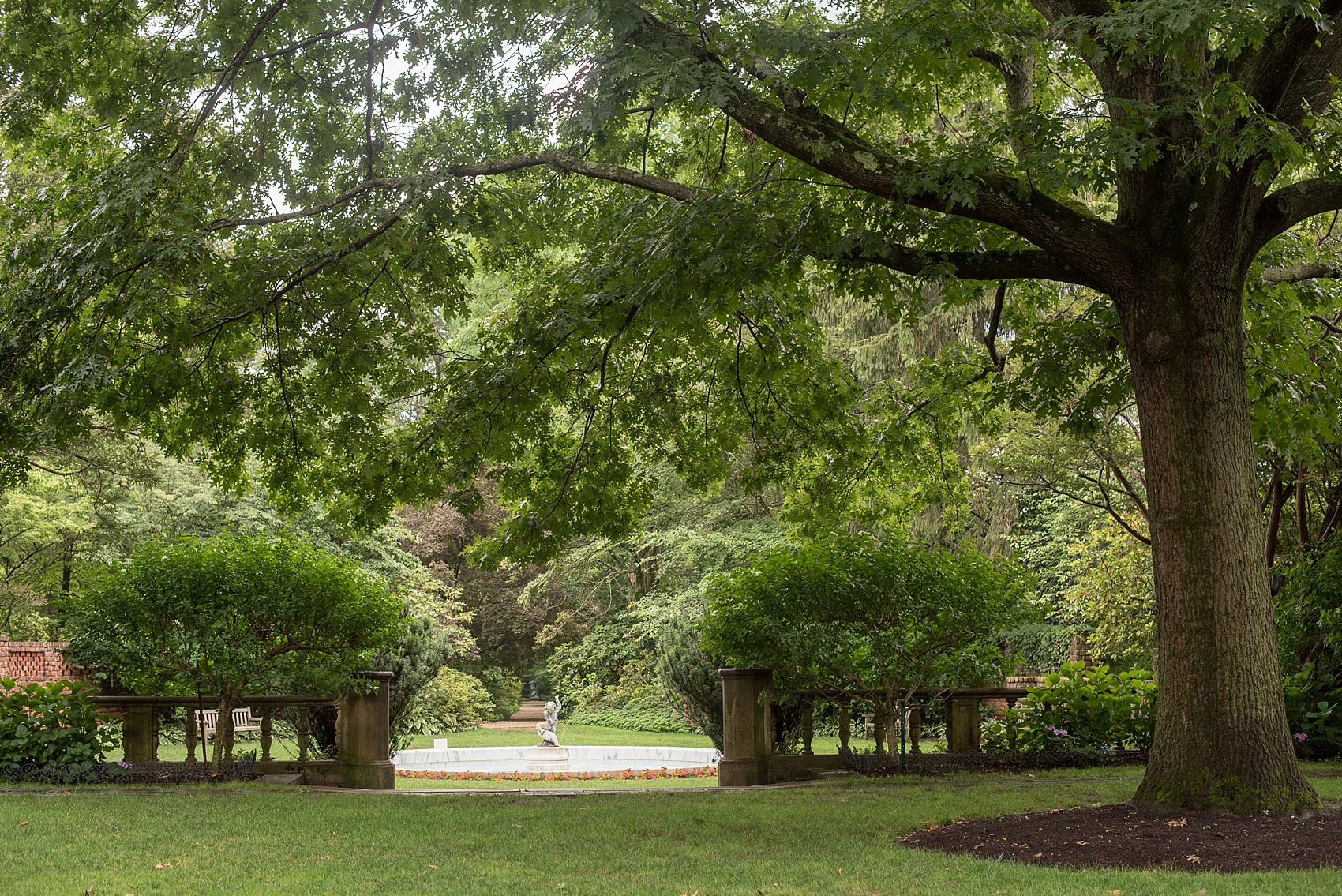 Taking Photos Around the Gardens Before the Surprise

We couldn’t have lucked out any more with the weather. Zach and I kept thinking about the forecast throughout the day as it was raining on and off, fairly heavily at times. But we crossed our fingers and hoped for the best, opting to forego a rain plan.

And whatdoyaknow it worked out.

Like a Christmas miracle, it stopped raining for the single hour we went to the Planting Fields (though it drizzled a tad once or two). Because it was raining all day, to our advantage, we were the only visitors. It’s like we had the entire property to ourselves!

So you see these really cute photos of Zach and Dani pre-proposal? Well, my brother’s not like this, all “cooperative” in front of a camera and happy-go-lucky all the time. It’s cool. I get it – he’s a man. I get this a lot from grooms/guys. They grunt when you ask to take their picture. But my brother was awesome that day. Let’s rewind to how this happened, shall we?…..

…Dani and my brother were shopping for engagement rings together so she knew it was coming. But once she let him know what design and stone shape she liked, she didn’t want to be involved.

But Zachary’s sister (achem, moi) wanted to be! After all, if anyone knows anything about proposals in the family it’s me. I photograph them often (I consider myself lucky – I really love them) and I know a thing or two about the “perfect” proposal.

Steps to the Perfect Proposal

Step 1: Come up with a memorable location, perhaps meaningful to you. Paris? Sure! Your bedroom? Okay…I can accept that. But it’s gotta be good for you and your partner.

Step 2: Presentation and details – don’t skimp, don’t be lazy. Make it special – you’re asking someone to spend forever with you. Do it right, no matter how you propose or where it is from the top of the Empire State Building to the comfort of your own home.

Step 3: Muster up courage, and get ride of your nerves…get down on one knee when the moment is right, tell your partner you love them, say it with conviction! Look into his or her eyes! (No seriously – you need to…)

Step 4: Ideally, the proposer places the ring on his or her new fiance’s finger. Don’t let the person you asked grab that thing and put it on themselves. It’s not as special. But hey, I get it – in the moment anything goes.

Step 5: PLAN SOMETHING for afterwards. I always find it odd when a couple gets engaged and then there’s nothing planned after. Go to dinner, have a special dinner at home, plan for family to surprise you at a nearby restaurant or bar. Go on vacation! Get in the car and drive to a weekend getaway! Hell, I don’t care what – but you best have something planned to keep the momentum of all that excitement and adrenaline going!

And men or womenL let me share a little sumthin’ with ya – if you’re proposing to your girlfriend or boyfriend, it’s likely he or she wants a great story to tell friends and family. I know this for sure. Even if it’s just very “you” and in the kitchen in pajamas. Refer back to Step 2.

Once they went ring shopping and Danielle was out of the rest of the equation (the actual proposal part) I swooped in!

My brother and I planned the proposal over a couple of phone calls, over the course of 4 weeks. The reason we thought about Old Westbury Gardens was because Dani mentioned it was a great place for engagement photos…and that stuck with me. Voila: location determined.

(And for anyone unfamiliar with Old Westbury Gardens and the Planting Fields – they’re somewhat similar. Both have pretty manicured lawns and colorful gardens on lots of land with a mansion that was a summer home from a rich family that struck proverbial gold in the early 1900s.)

I thought that was awesome, and since she collects Alex and Ani bracelets, we agreed an Alex and Ani box (albeit empty) should be in there somewhere to throw her off. The photo above is at home, photographing my brother wrapped the boxes. It cracked me up, because he’s not a good present wrapper. He can’t wrap boxes. But the effort was there and that meant something! I would take the boxes from him then and the ring, and carry them with my in my camera bag so she wouldn’t know we had it.

We reached the formal Italian garden below after walking around for about 40 minutes. Dani was walking slightly ahead of us and Zach and I looked at each other immediately with bright eyes and whispered, almost in unison, “This is the spot!” Isn’t it gorgeous?

We sat Danielle down to enjoy opening her gift. See the picture above? You can see Zach reaching into his pocket to grab the ring box. She doesn’t know that yet though. Eeek! Exciting!

There was another smaller box inside the Alex and Ani box. She’s probably thinking, “What’s going on?” In conversations after she said she thought something was up but did not suspect a proposal. She was SHOCKED! I love a good surprise. 🙂 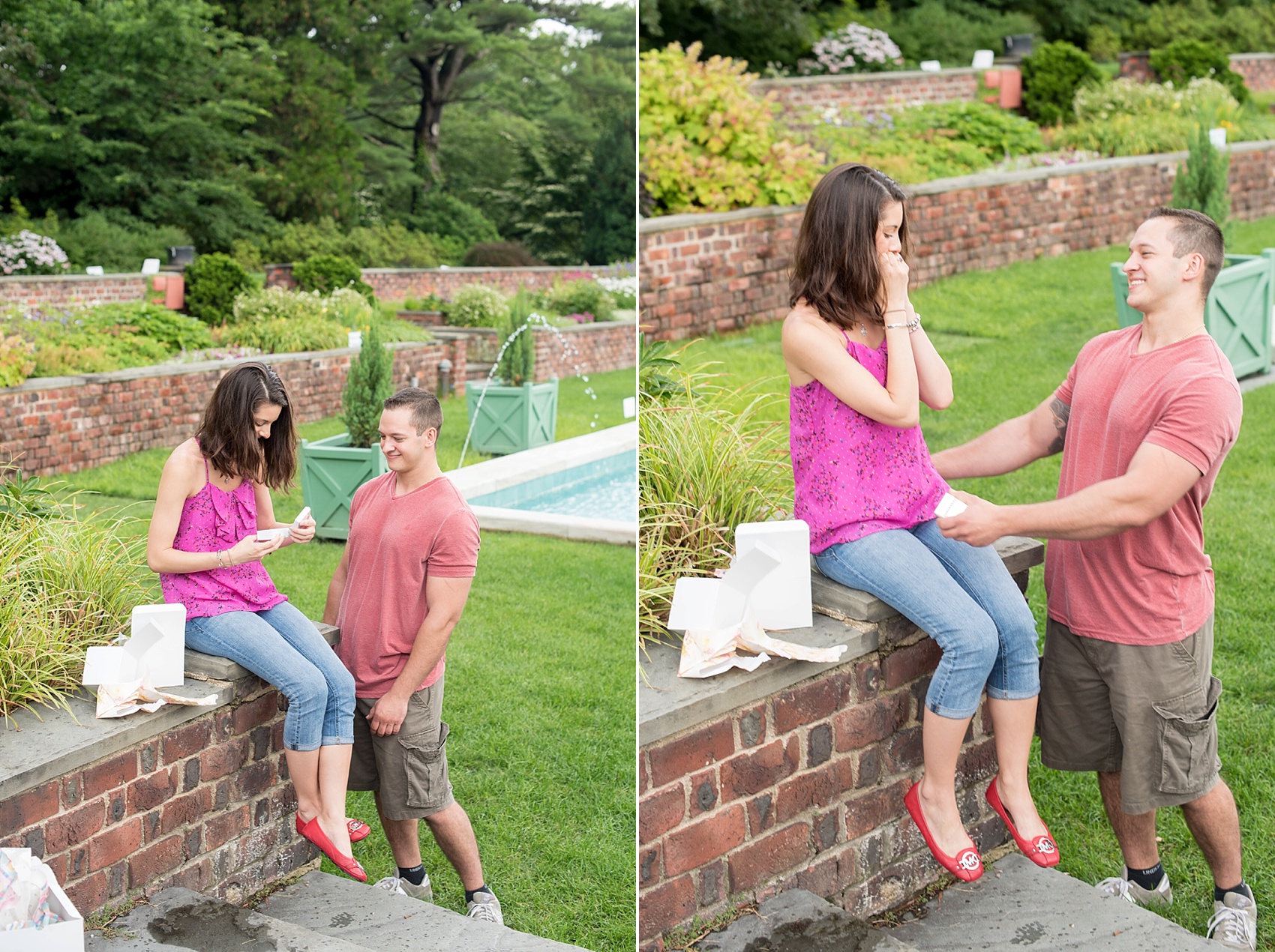 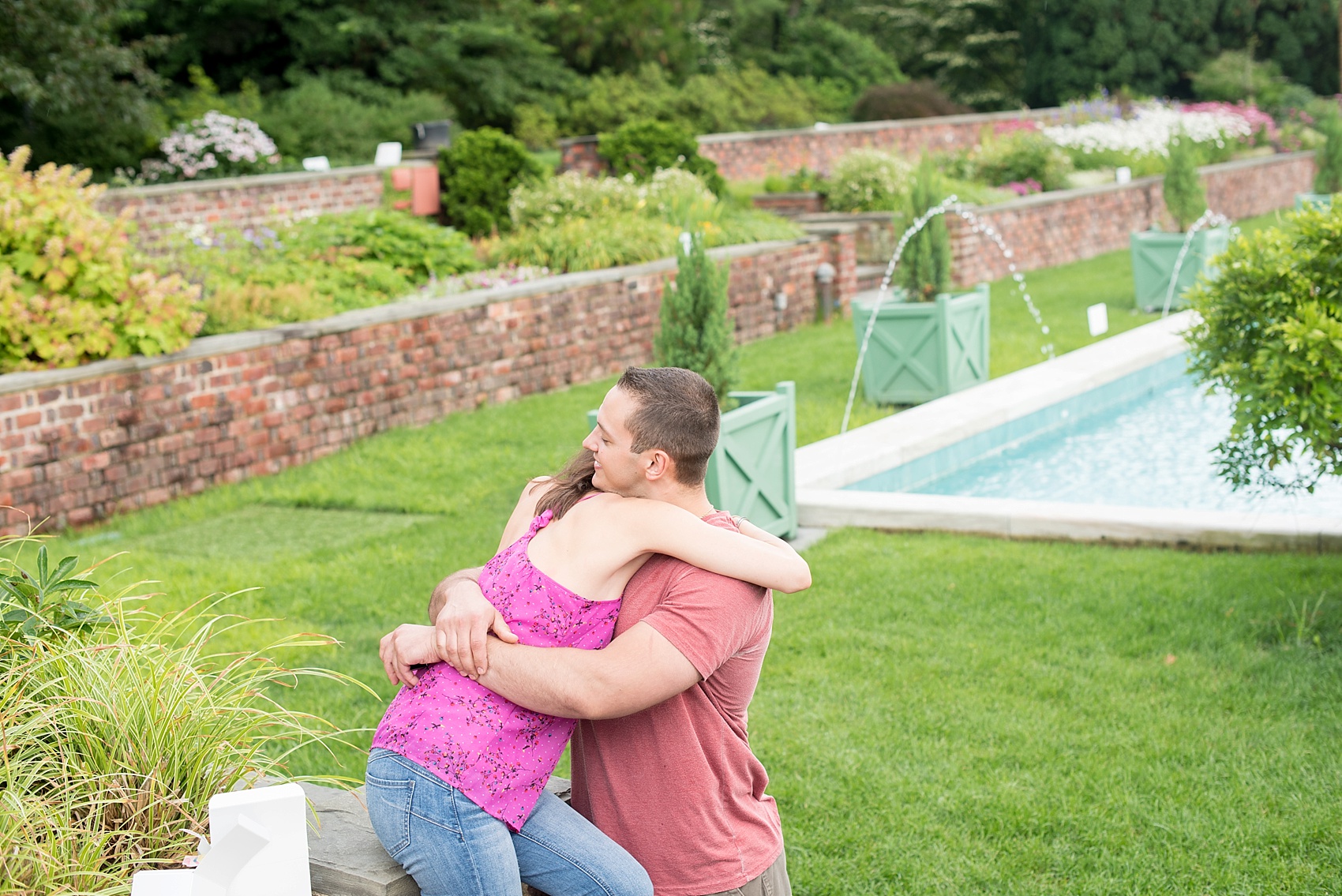 She was so excited they hugged before Zach even popped the question! And then….he got down on one knee and looked her in the eyes and told her he loves her…and asked! 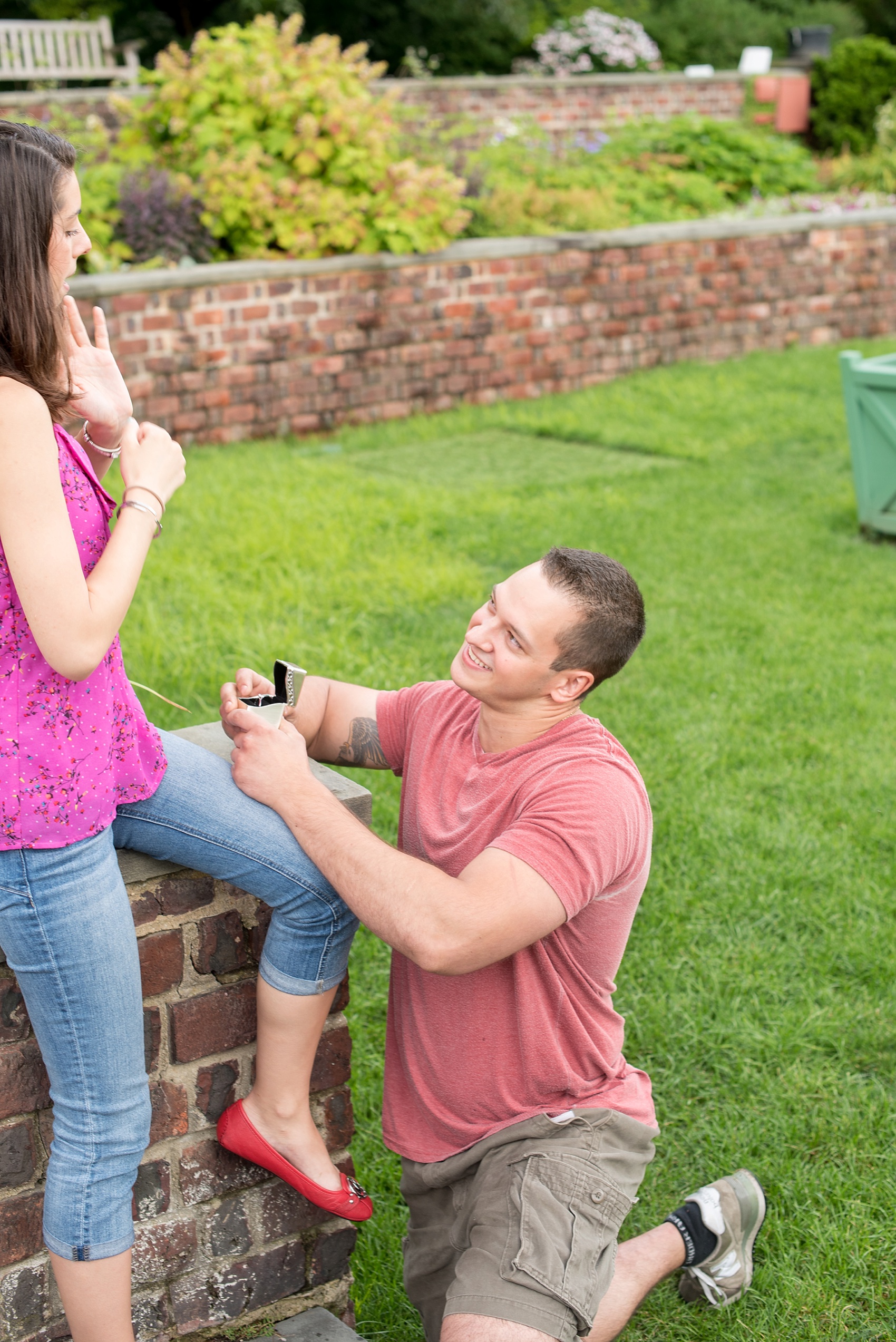 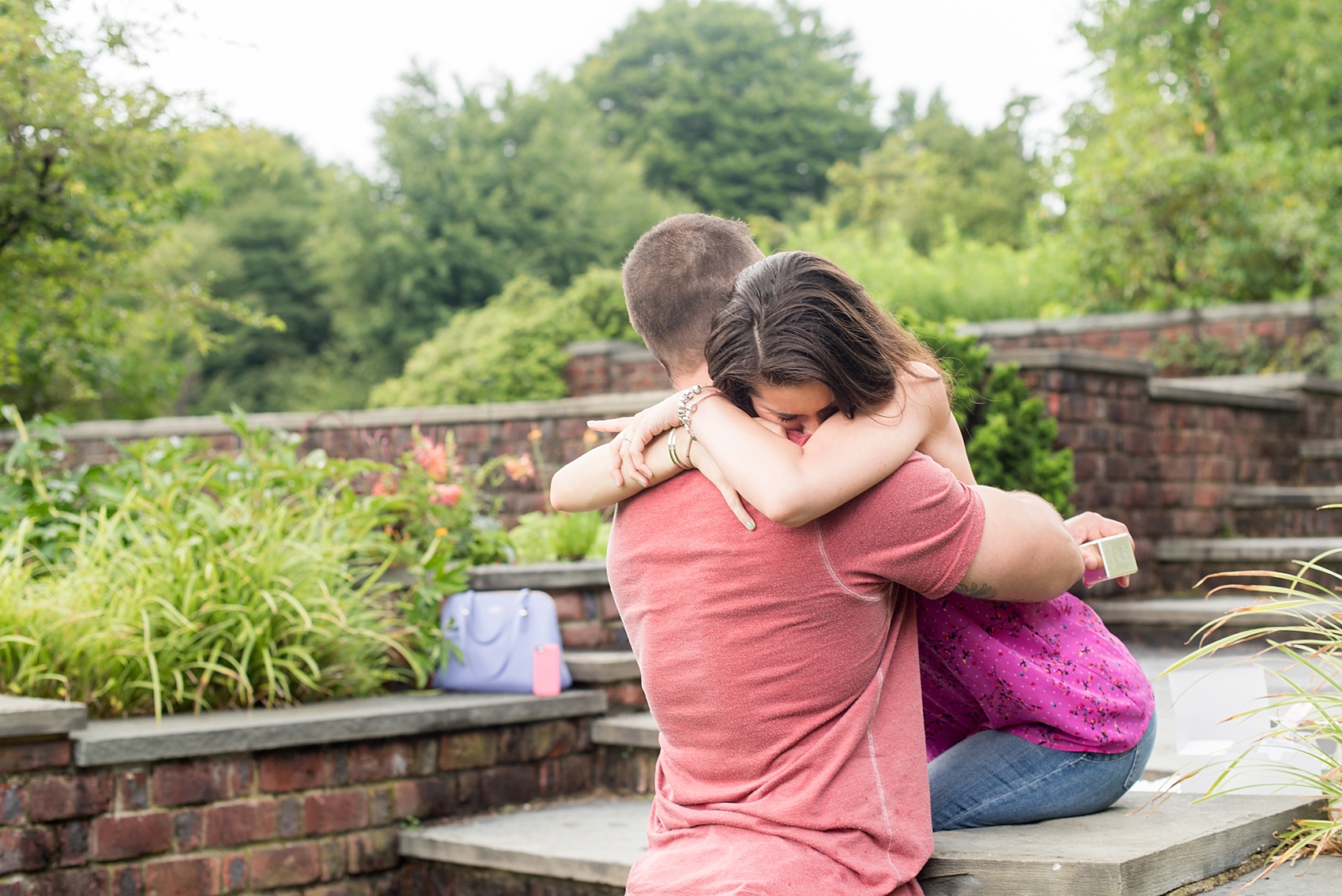 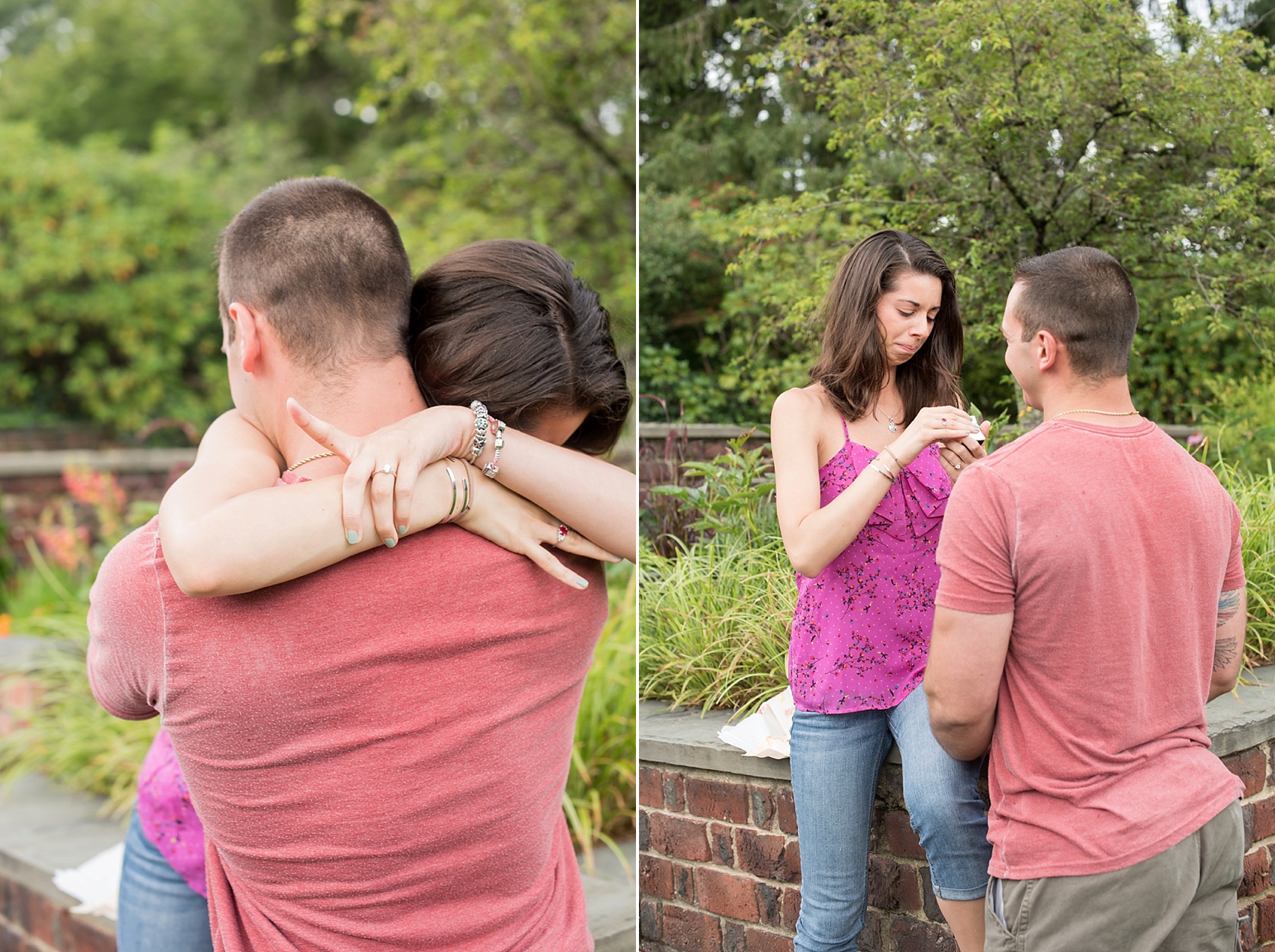 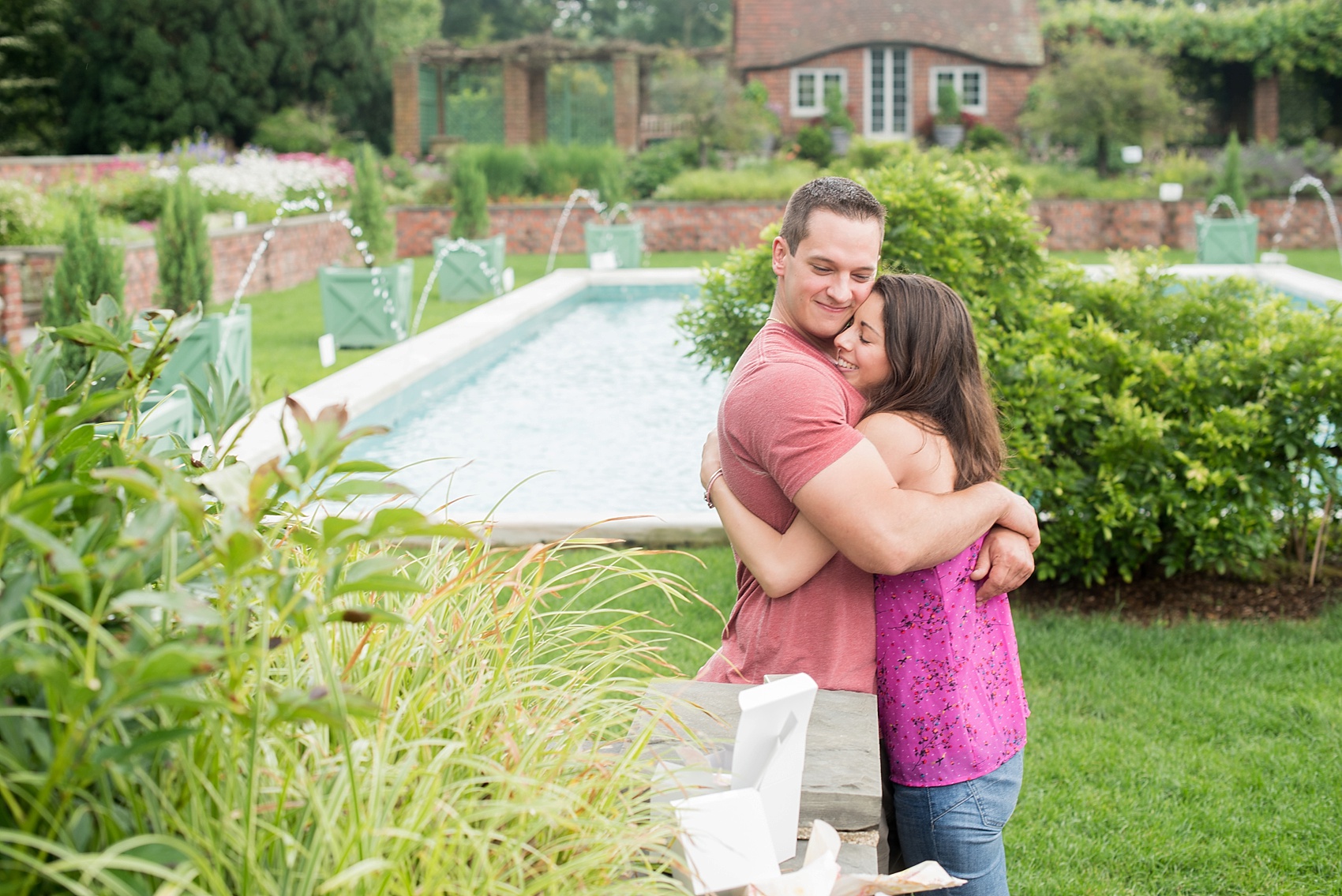 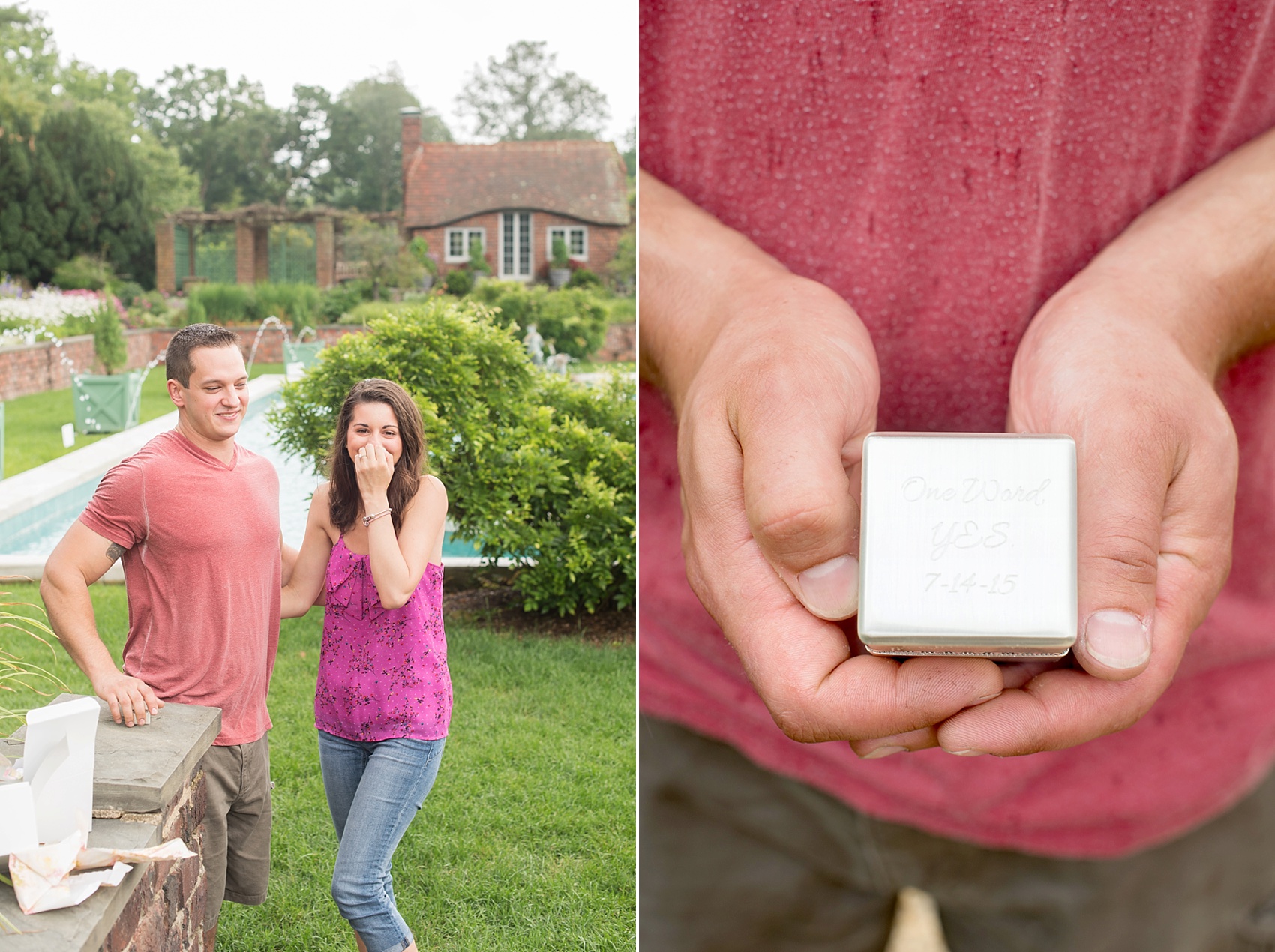 The actual ring box was extra special – Danielle’s mom, Lorraine, had it created for the occasion. I love that Danielle will have it forever. 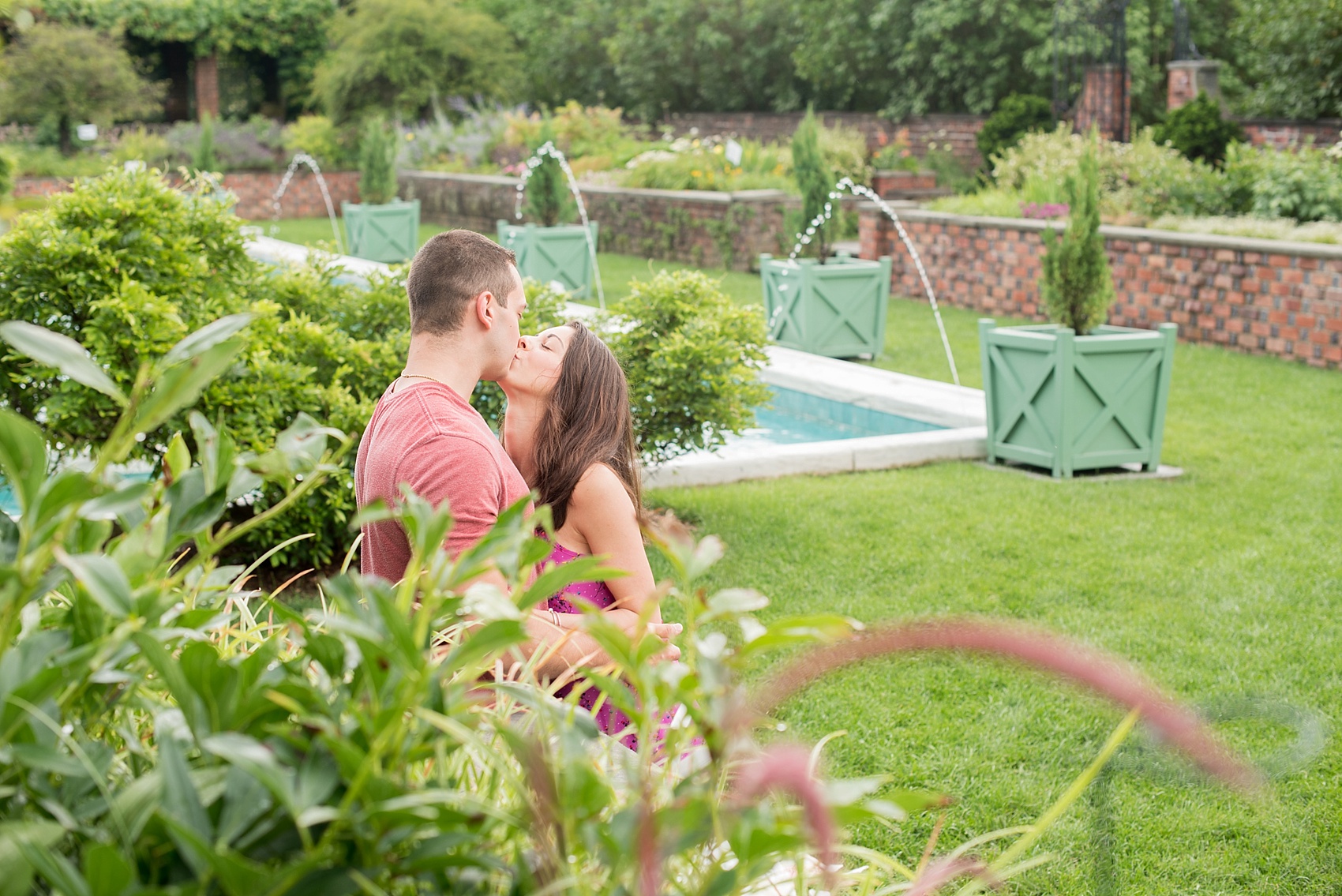 Seriously it was awesome. And she started to go through a list of her family “Does mom and dad know?! Does Joey and Denise know?!”… “yes…” “Everyone knows?! Did you ask my dad?!” Yes, yes. Yes! 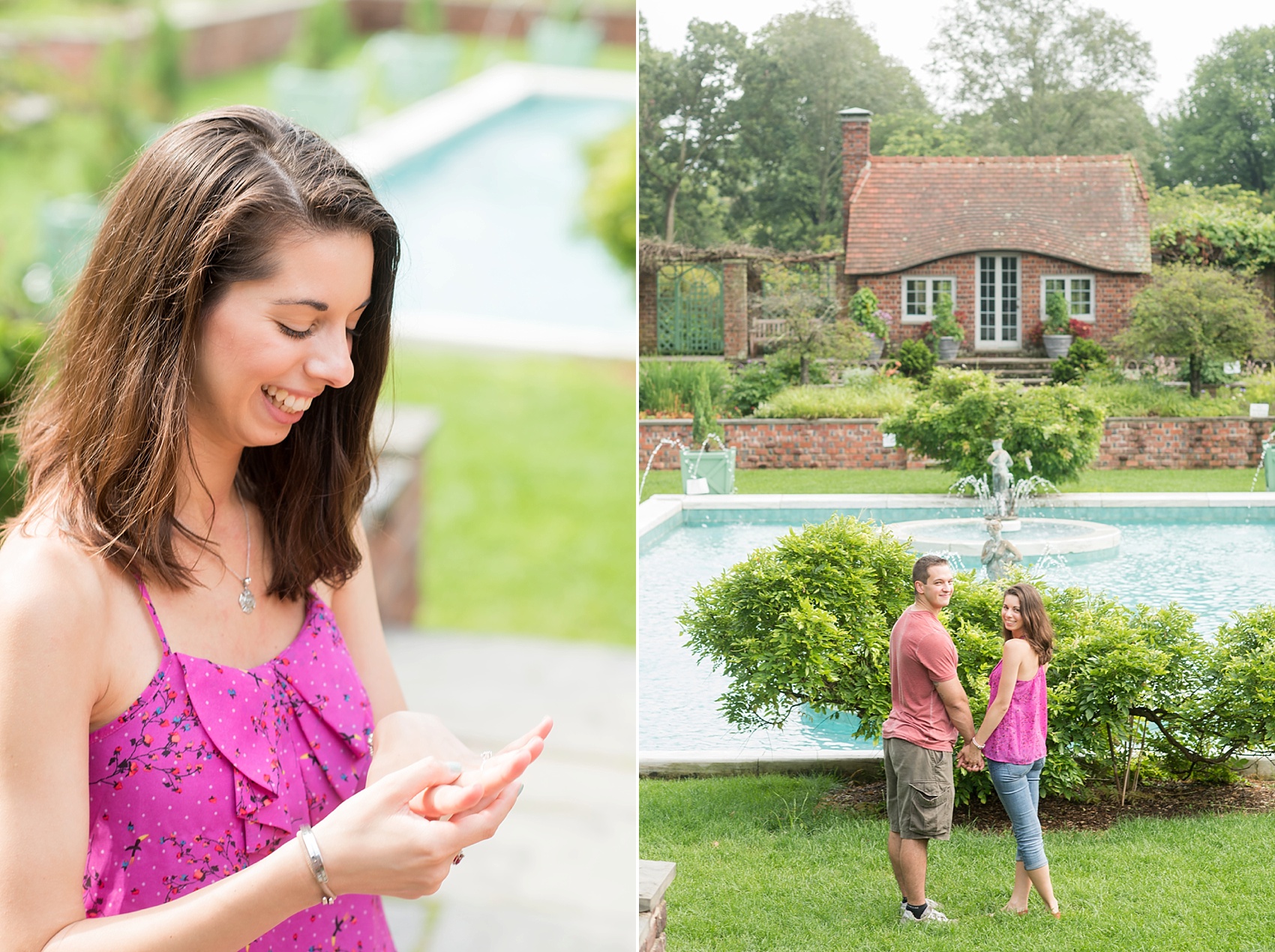 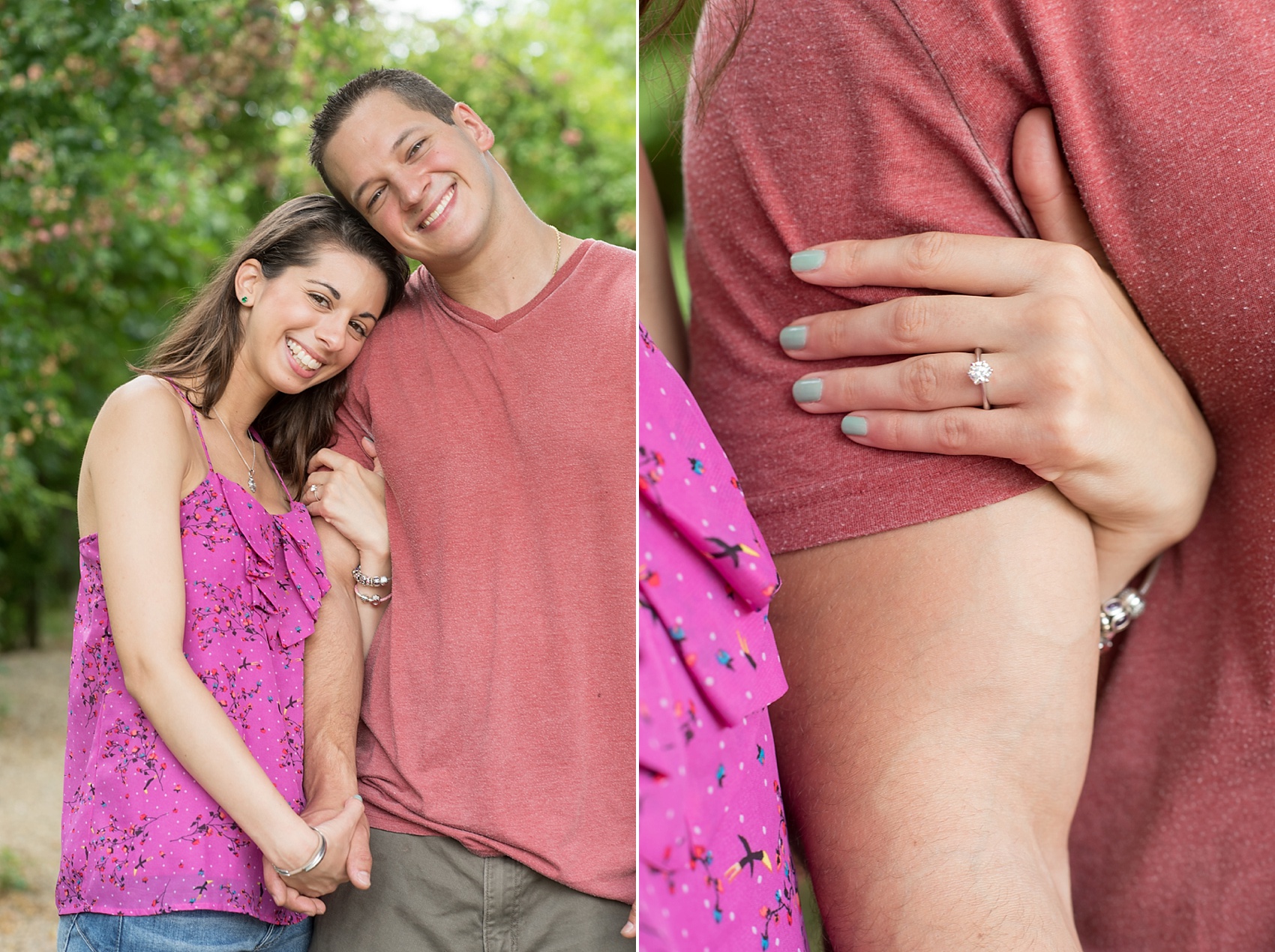 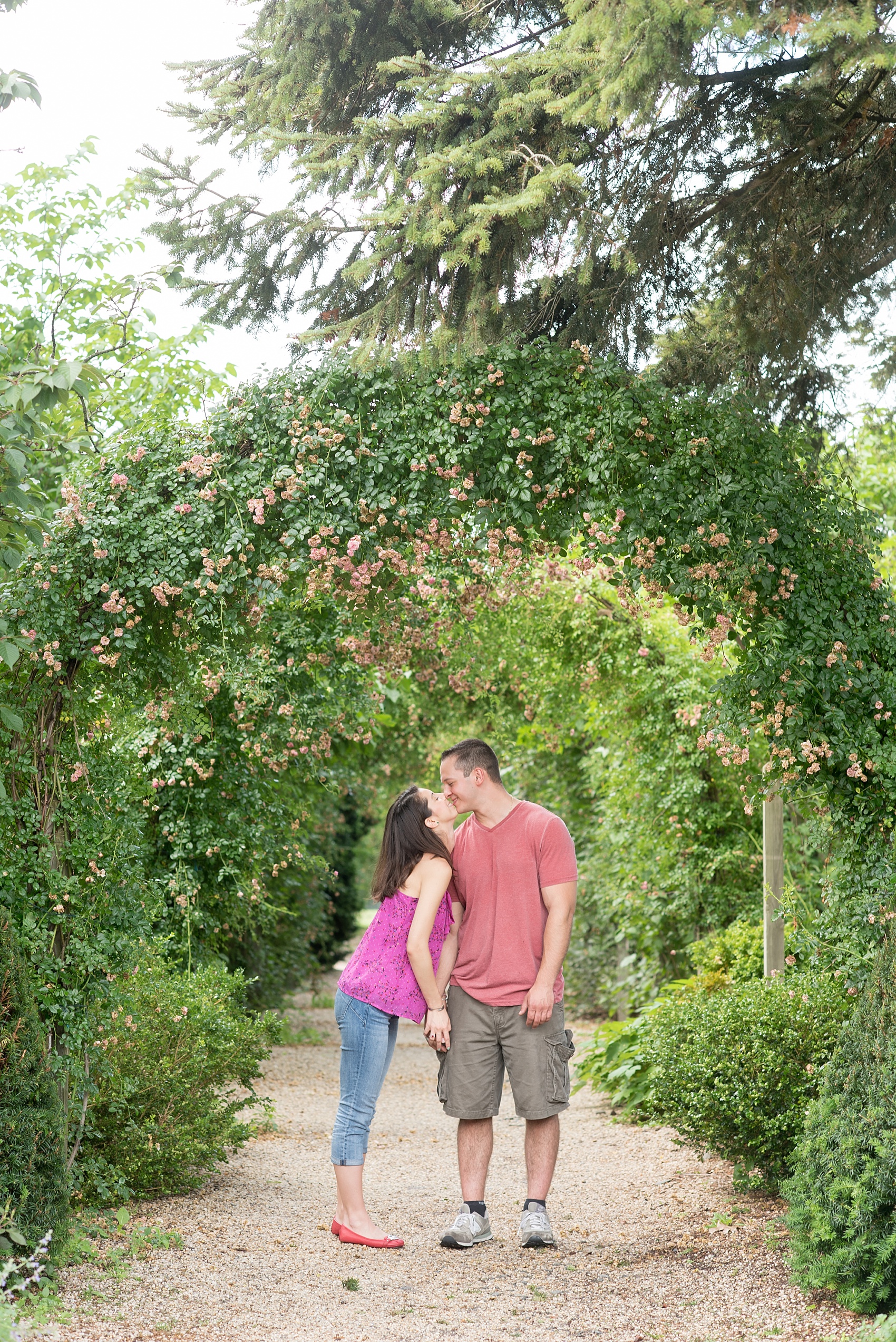 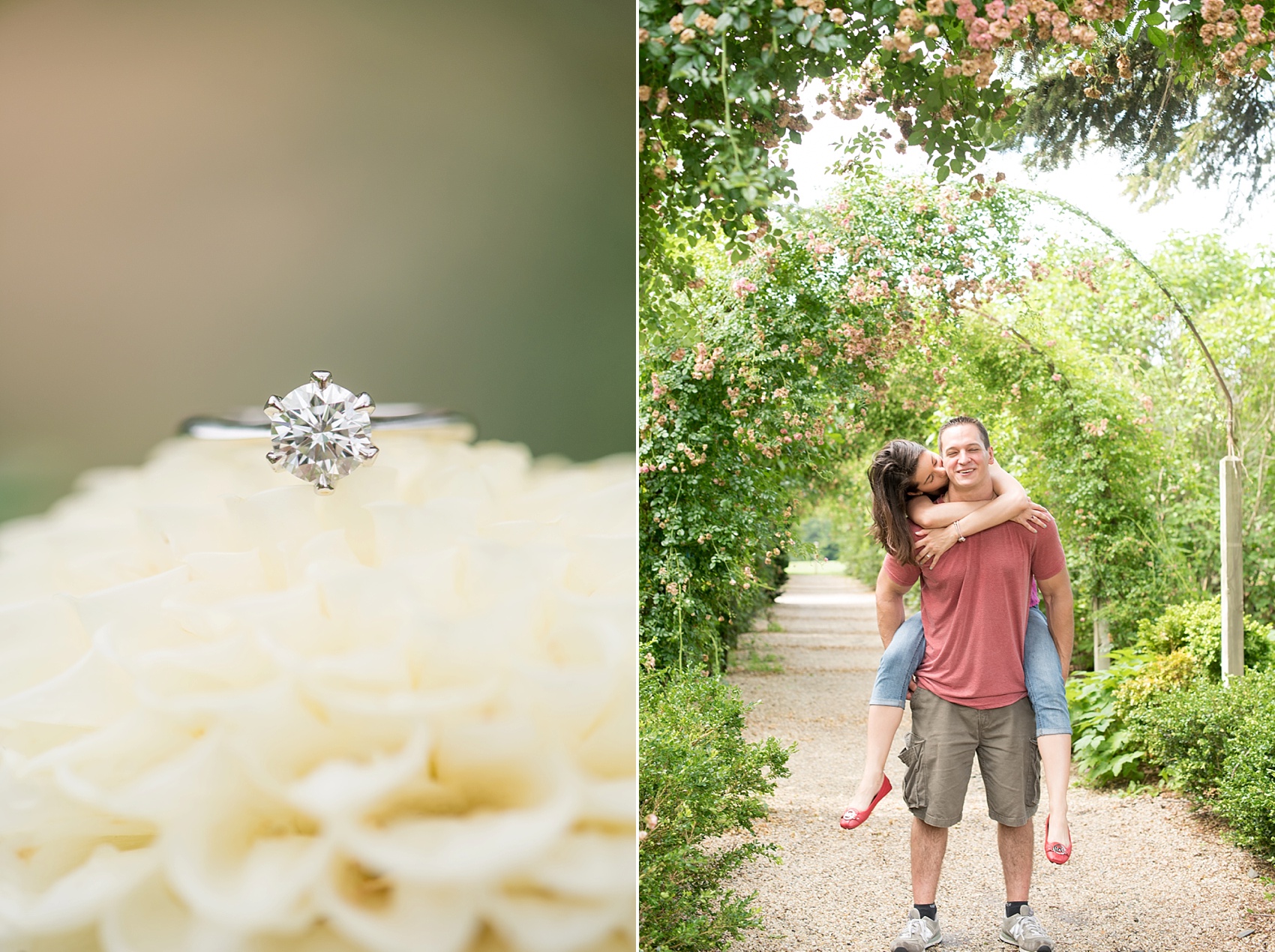 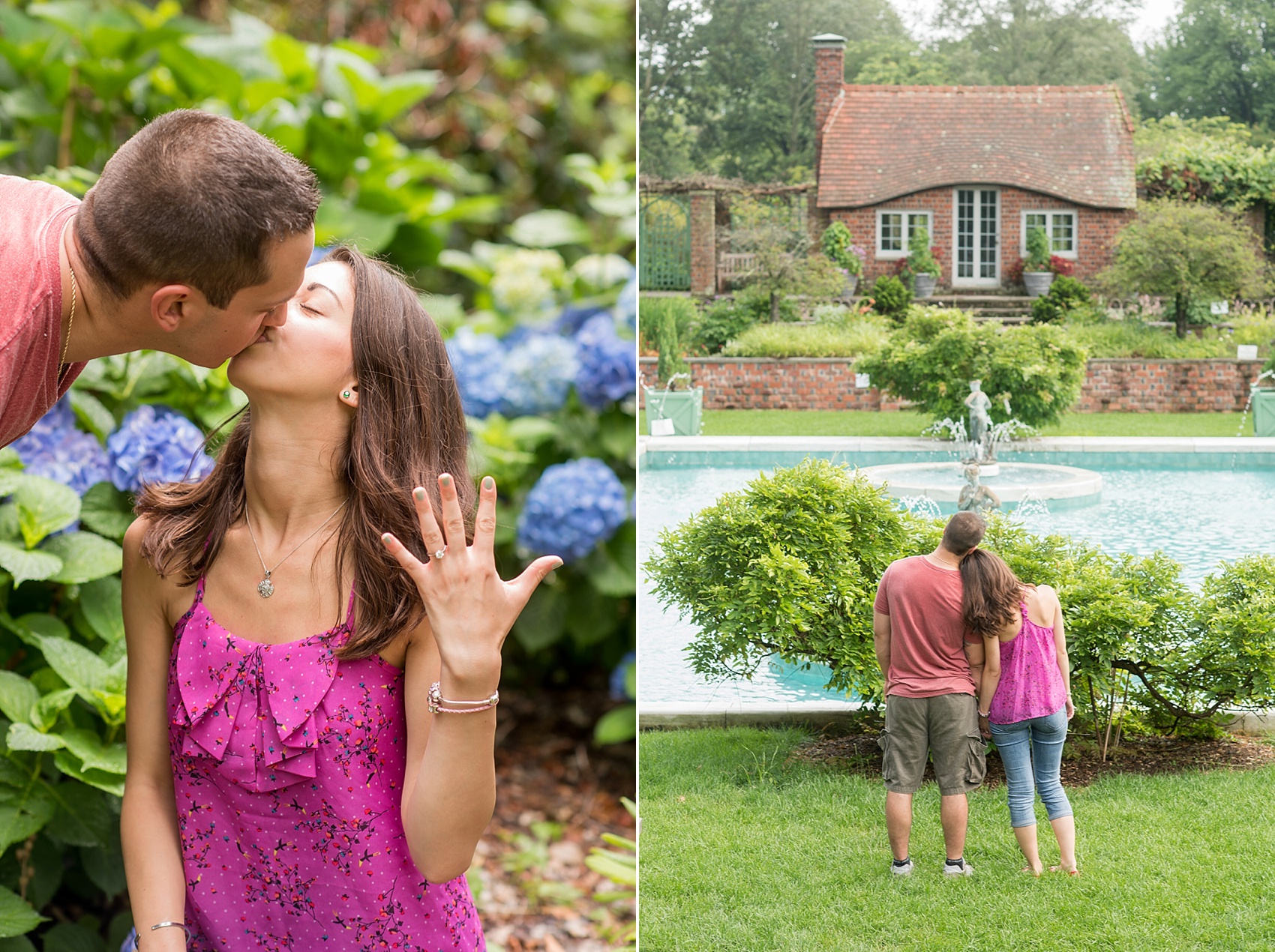 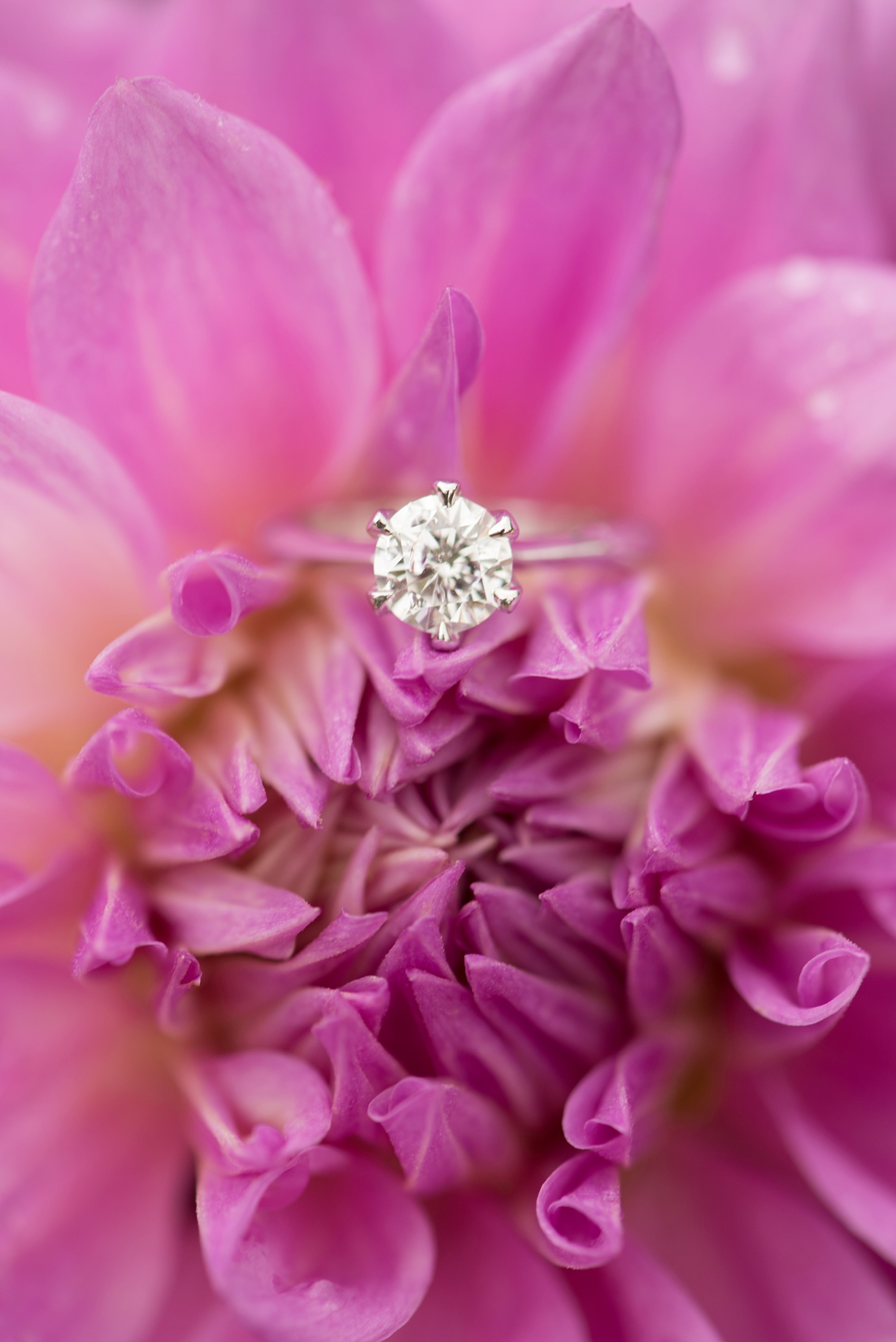 Zach was awesome and even indulged his big sister and new fiancee: he agreed to walk around for 15 more minutes and take photos with her! Almost on queue, the rain started at 5:00pm when the Planting Fields were closing. The humidity was getting to all of us, anyway, especially Zachary. They needed to leave to change for dinner regardless, because the day wasn’t over!

They had dinner plans in the private wine room at Prime in Huntington, on the harbor! YAY! 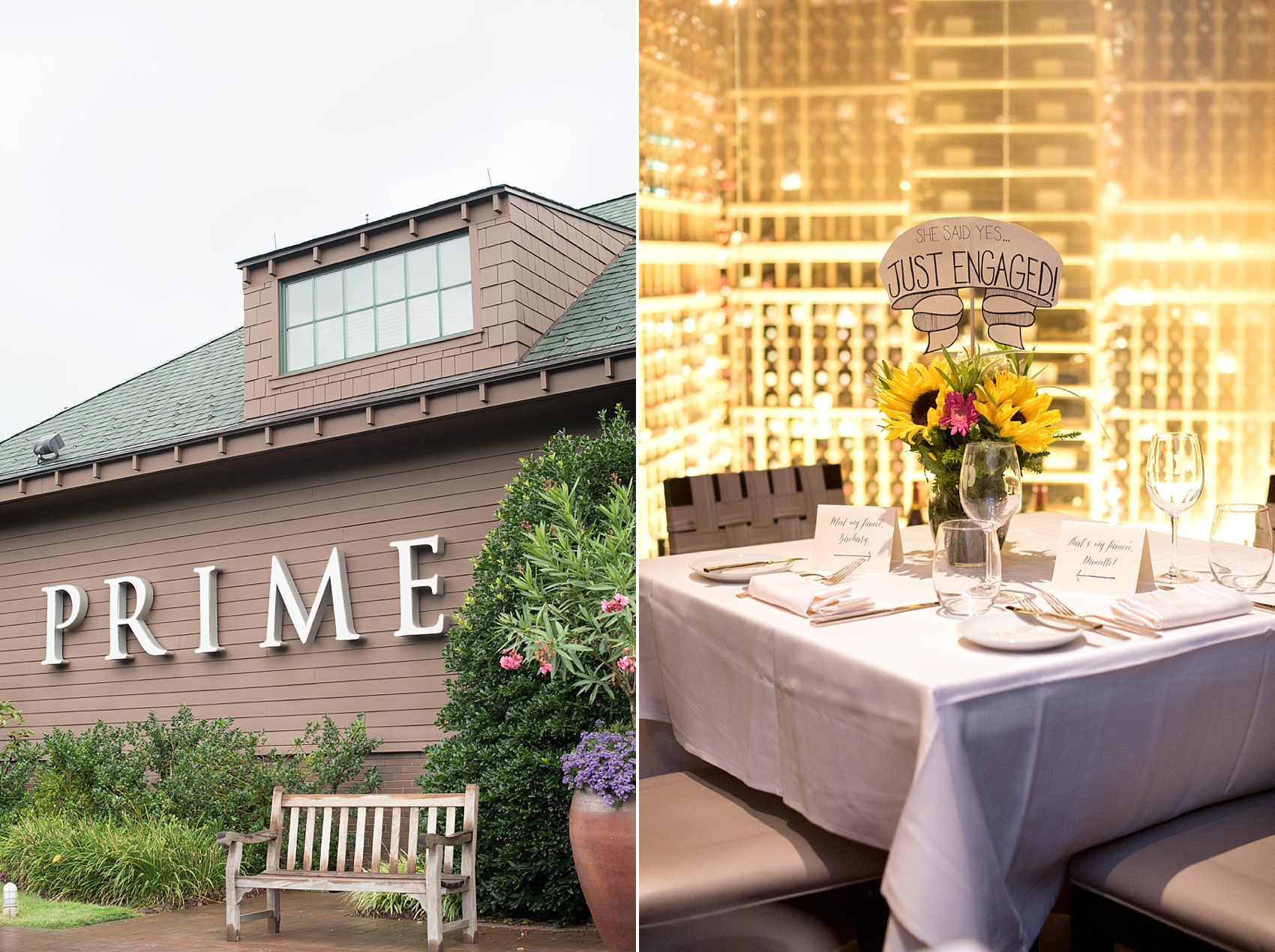 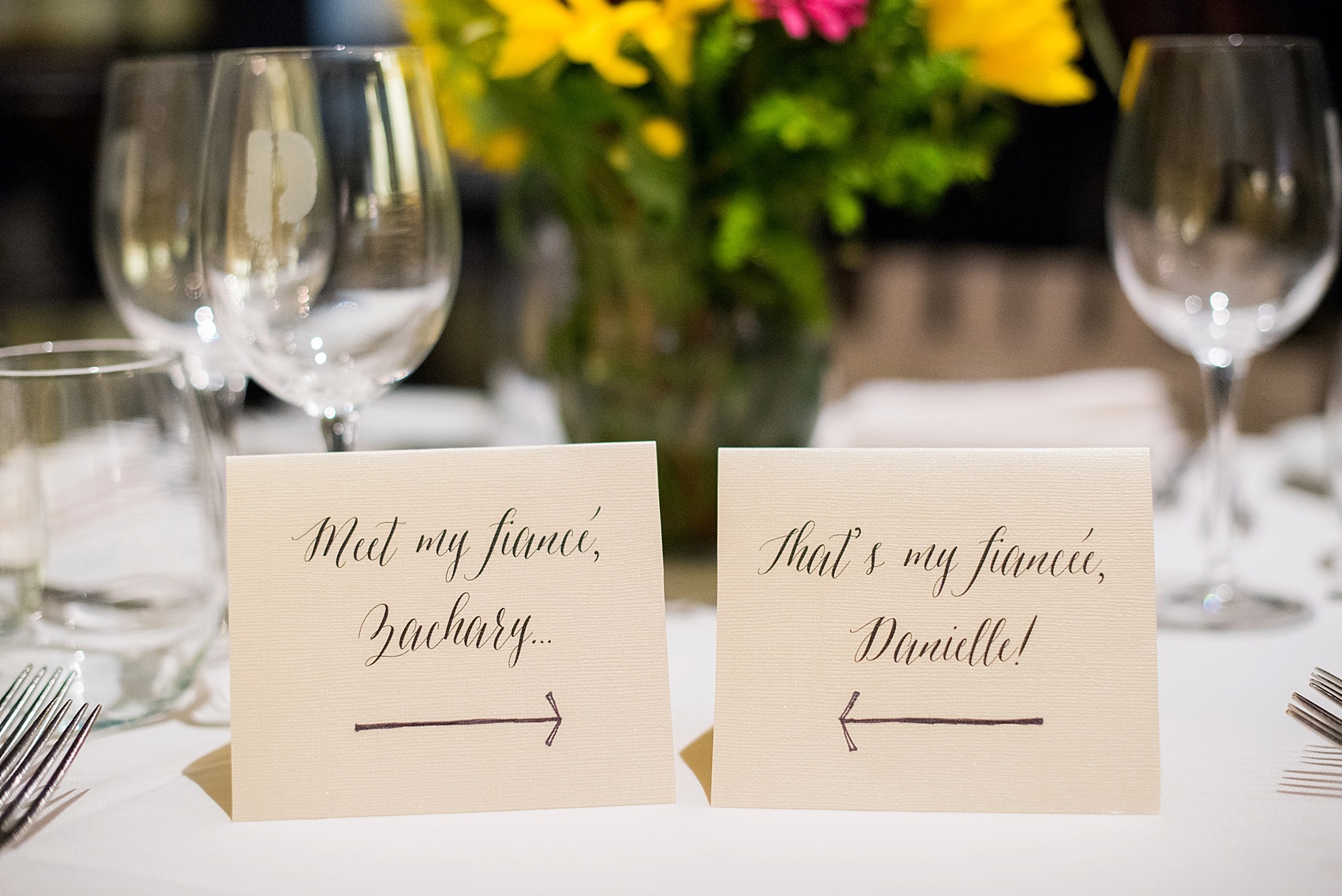 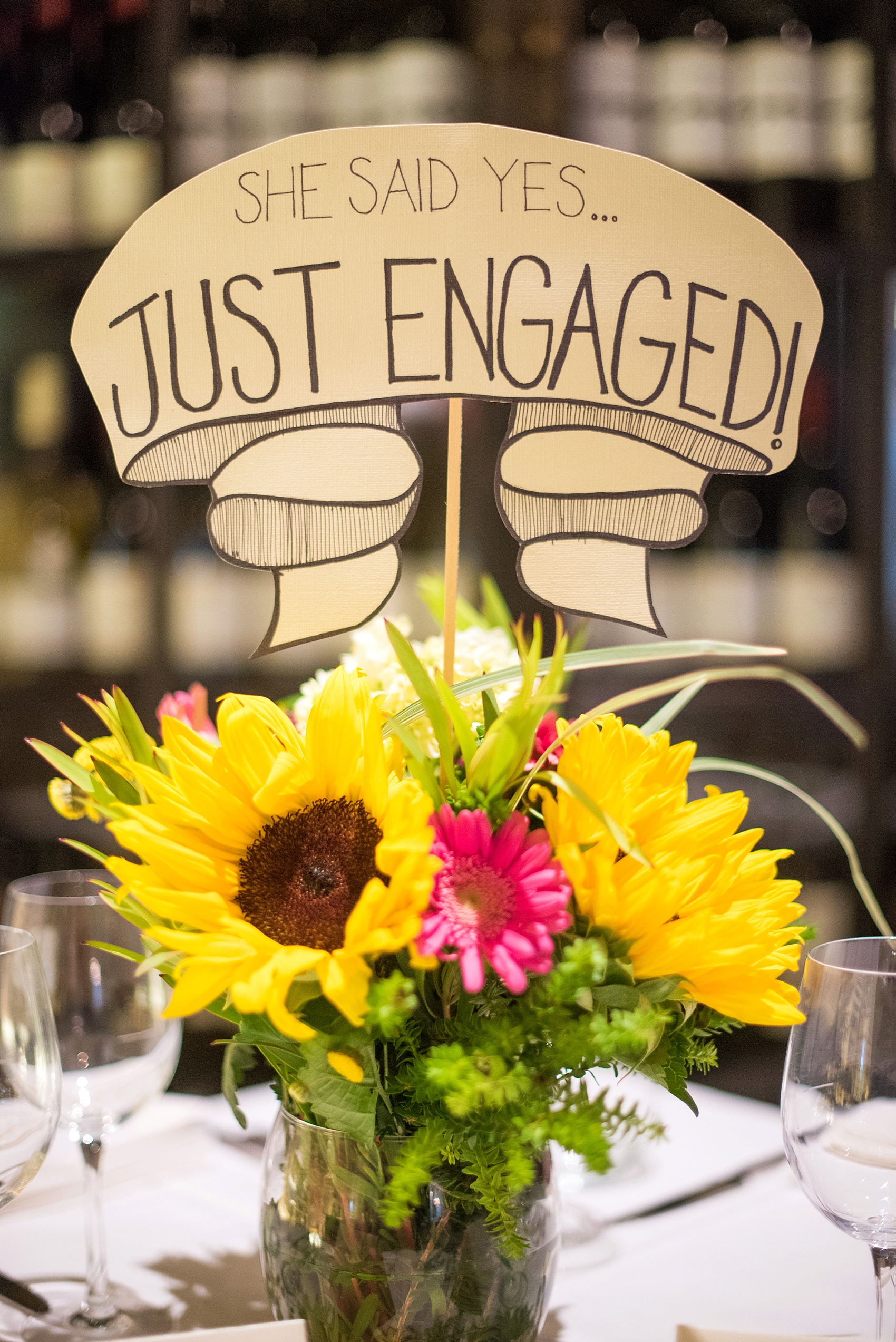 While Zach was wrapping the boxes for Danielle earlier in the day I was sitting next to him making these signs and floral arrangement to bring to the restaurant. So I left the house to deliver it to Prime earlier in the day, then met Danielle and Zach at the Planting Fields.

Dani had no idea any of this was going on all day! And when I left them at the Planting Fields I said, “Goodbye! See you in August,” when I would be back in town. She had no idea the family would be at Prime when they finished dinner, just the two of them, to surprise them and celebrate with drinks and dessert! Surprise! 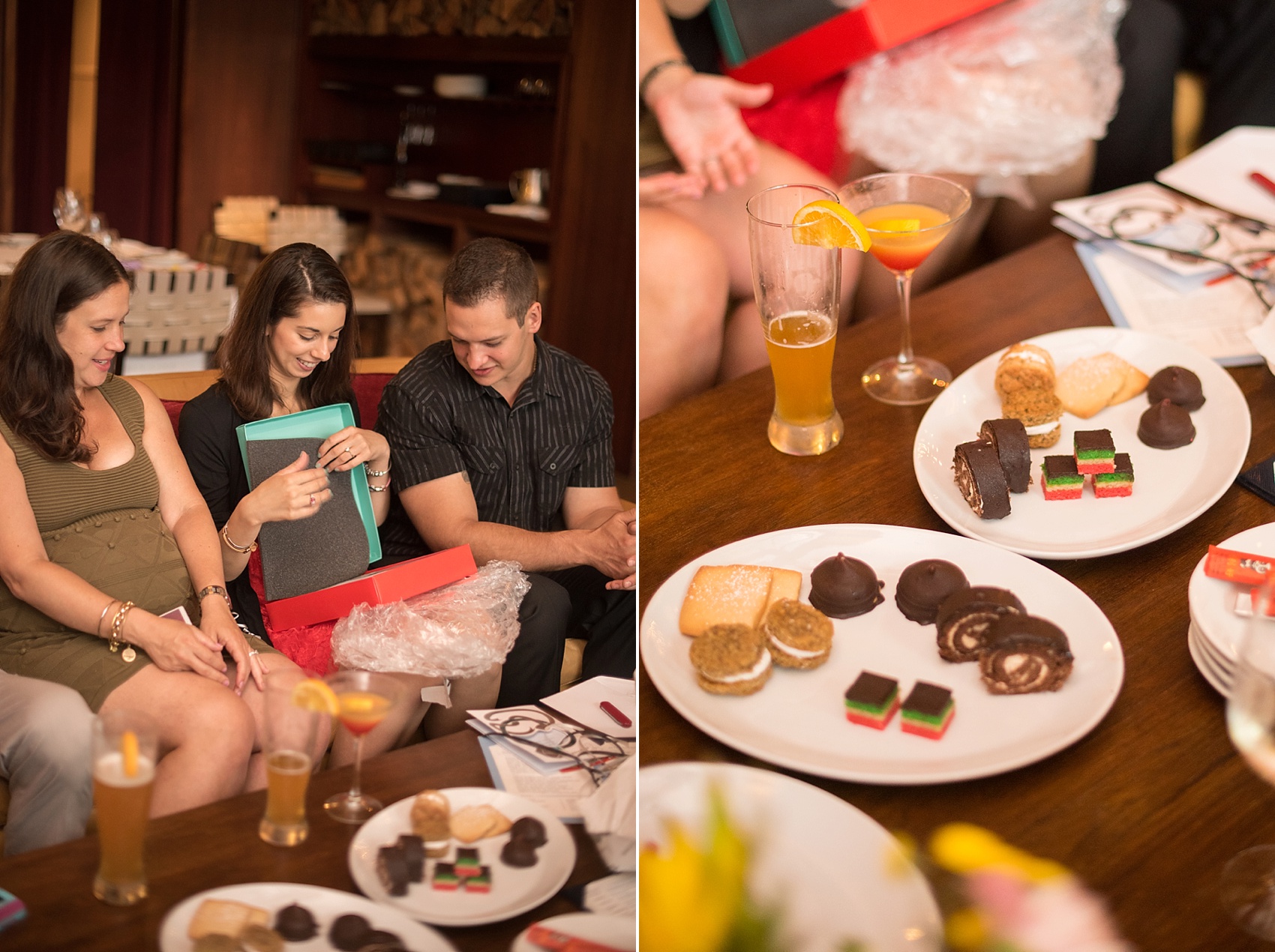 …and there were presents! Lots of presents! Which included: the actual Alex and Ani bracelet from me (if anyone’s curious, a new “sailor’s knot” because they’re going to tie the knot!), wedding magazines from her parents (back when plenty were still in print), a Kate Spade “toast of the town” frame from my parents, a “yes” Kate Spade necklace and ring dish from my sister’s family… So fun, right? 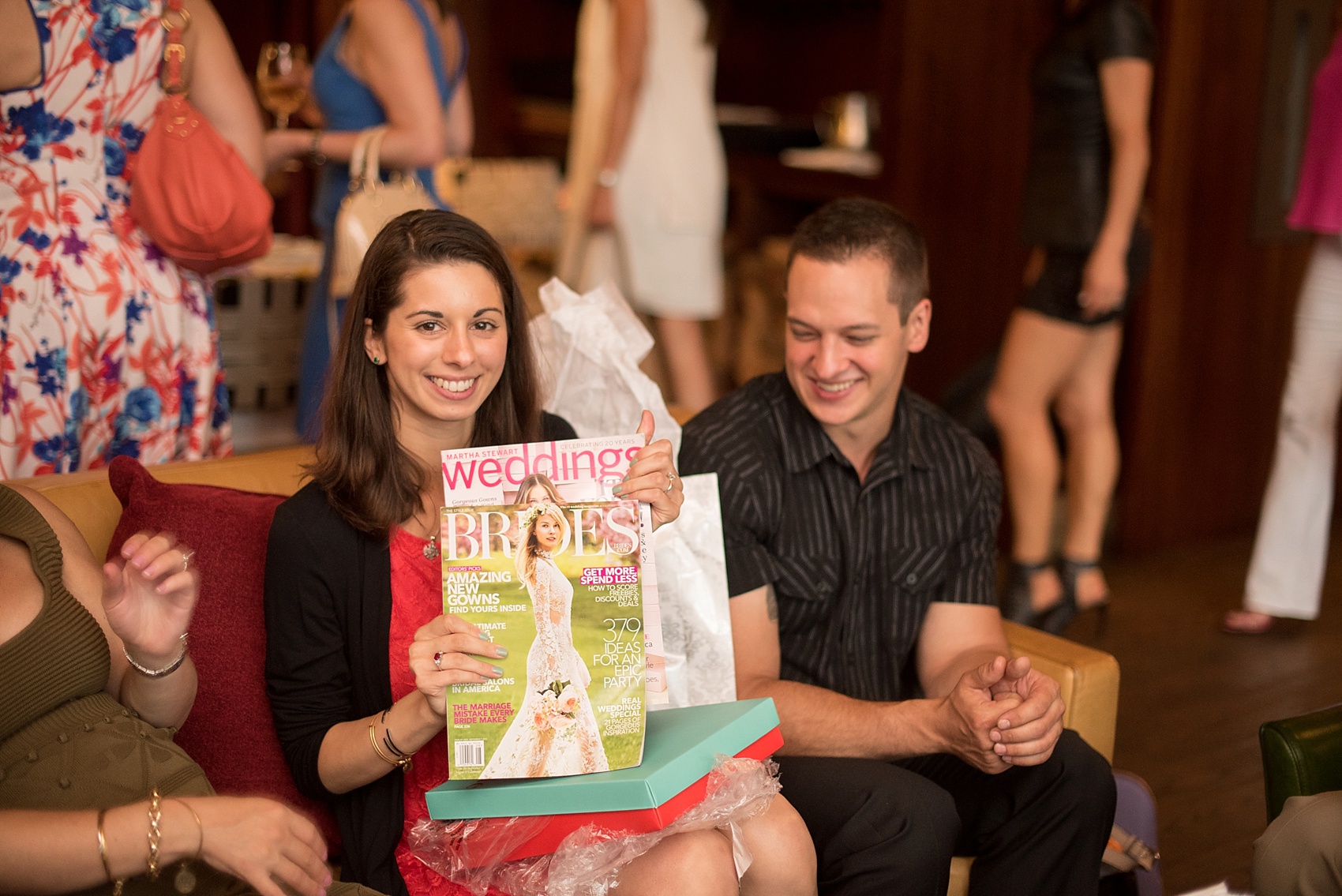 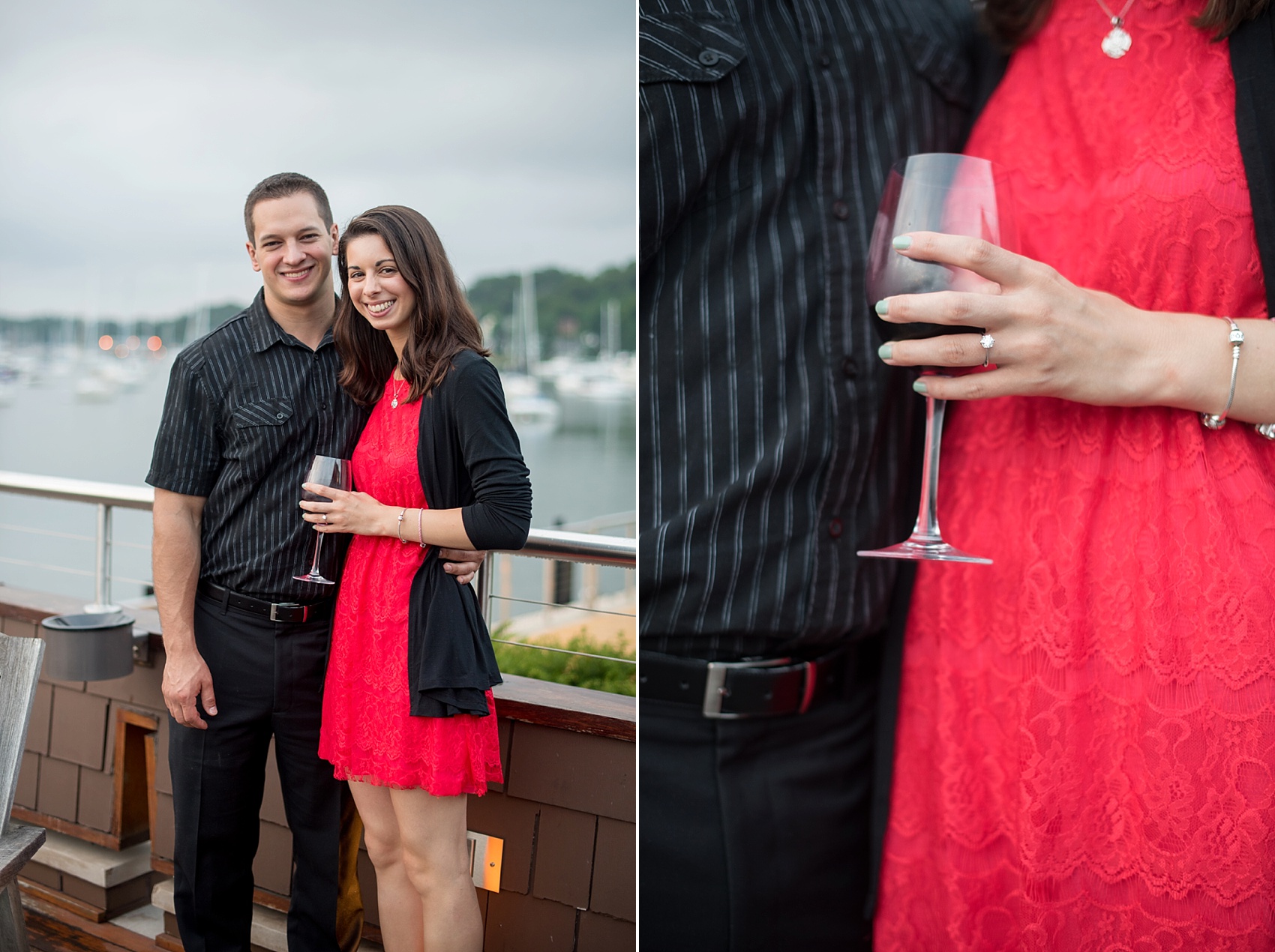 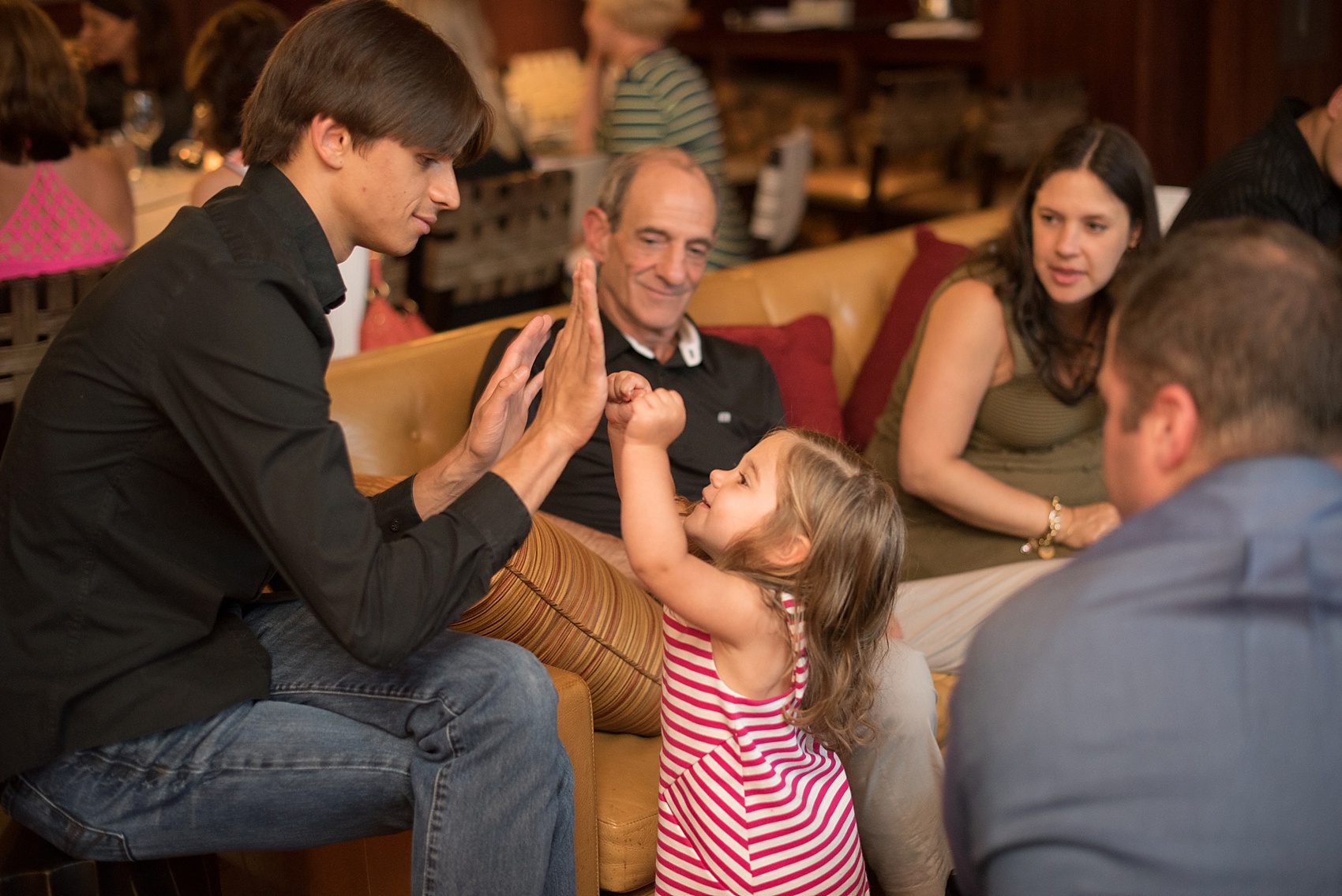 I love this photo of my niece fist-pumping Danielle’s older brother, Joey. So cute! That’s what the coming together of two families is about. Fist-pumping. 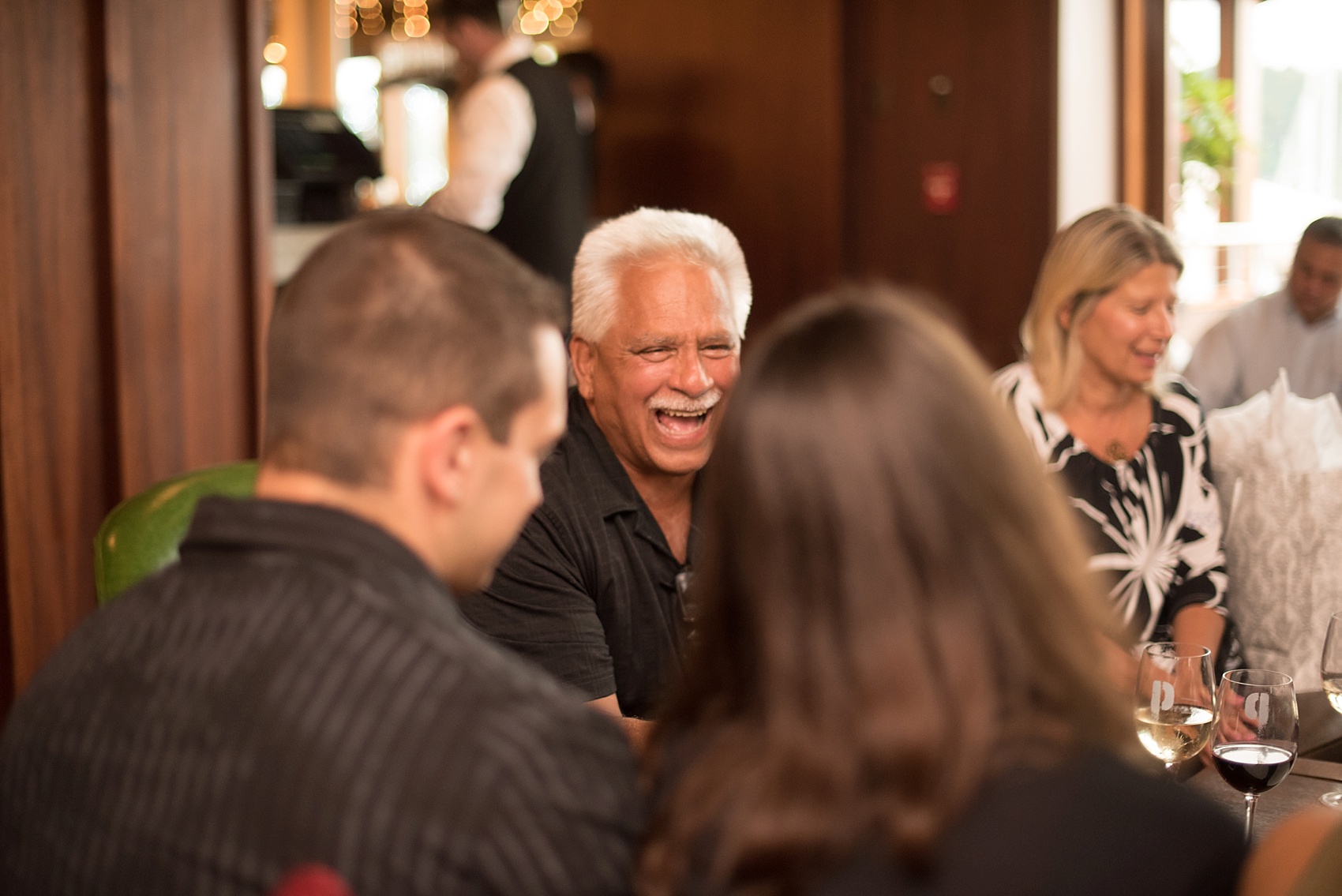 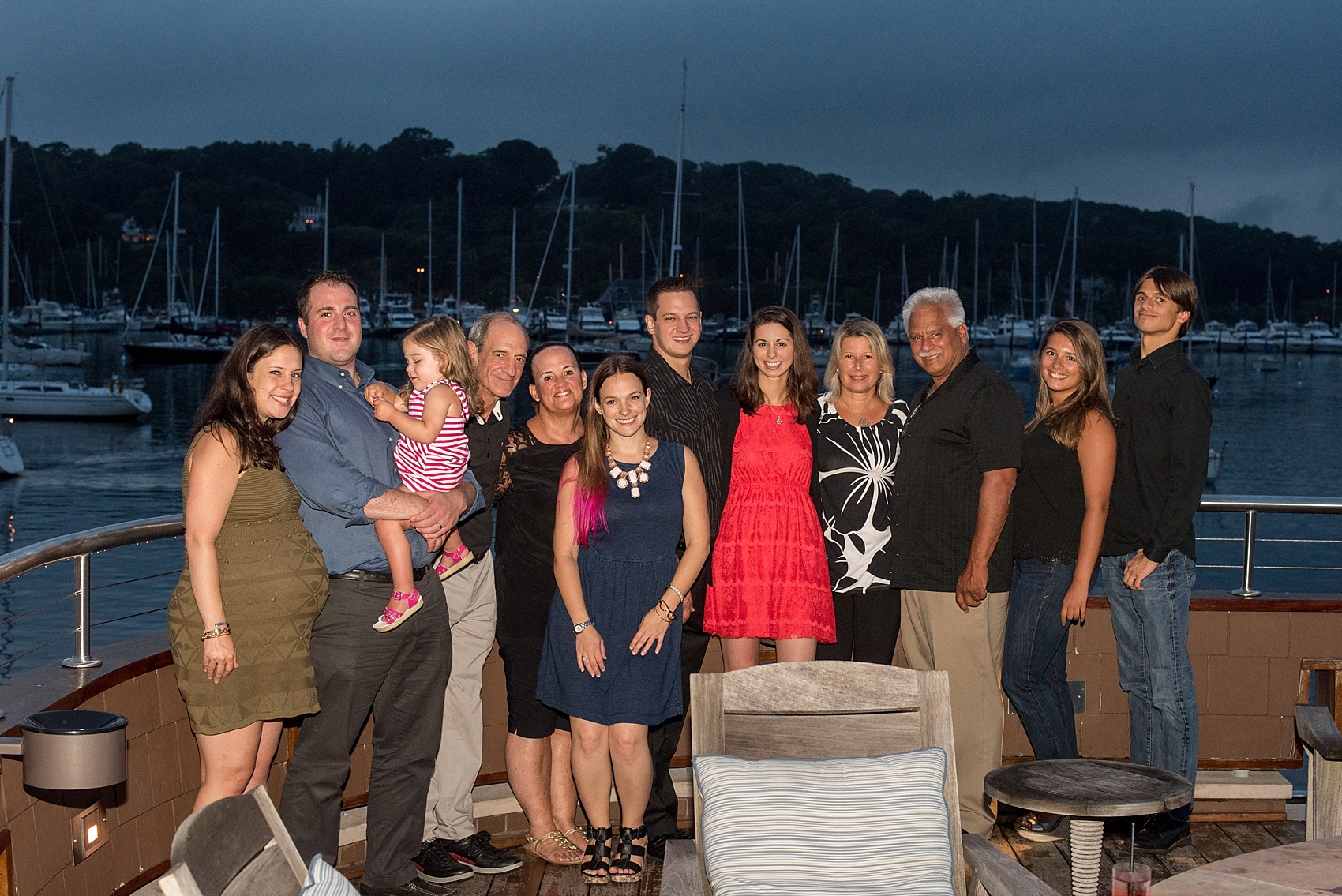 The harbor is beautiful there and we couldn’t end the evening, and their Long Island proposal day, without getting a great group shout in front of the harbor! And a huge shout out to the amazing staff at Prime and Harbor Club for assisting me and my brother in making this a success, from Rae-Marie, to Angela and Kathy, to Dana and Chris, to Sue who I adored seeing and missed since meeting her at a NYE wedding there. They were truly wonderful and accommodating at Prime.

I was so honored to have been able to help my brother orchestrate this once-in-a-lifetime event. Which was followed by their amazing Long Island wedding!

What a beautiful story and such nice pictures..lots of love there for sure…so happy for both zach and danielle..wishing them a lifetime of happiness!!

It’s all so perfect and you captured every moment. Just wonderful. incredible pictures and loved reading the details!!!

It’s so true that a picture is worth a thousands words.
mikkel your explanation of zach and danielle’s story is a beautiful loving gift from your heart that will out live us all.

CONGRATS TO THE ENGAGED COUPLE. THIS WAS GREAT NEWS. LUCKILY KEITH GOT MY COMPUTER UP-TO-DATE AND SO I AM SO HAPPY FOR ALL OF YOU AND THE PICTURES THAT MIKKEL TOOK TOLD THE ENTIRE WONDERFUL STORY. THANKS FOR SENDING TO ME. WE LOVED IT.

guilty yes i am a wee bit teary eyed. i feel as if i was actually
there hiding in the gardens witnessing the events and thrilled to be a part of the moment. reading through Mikkel’s step by step explanation while studying each photo of zach and danielle’s extra special engagement shoot makes their story that much more special. you nailed it Kelly, spot on!
0
.