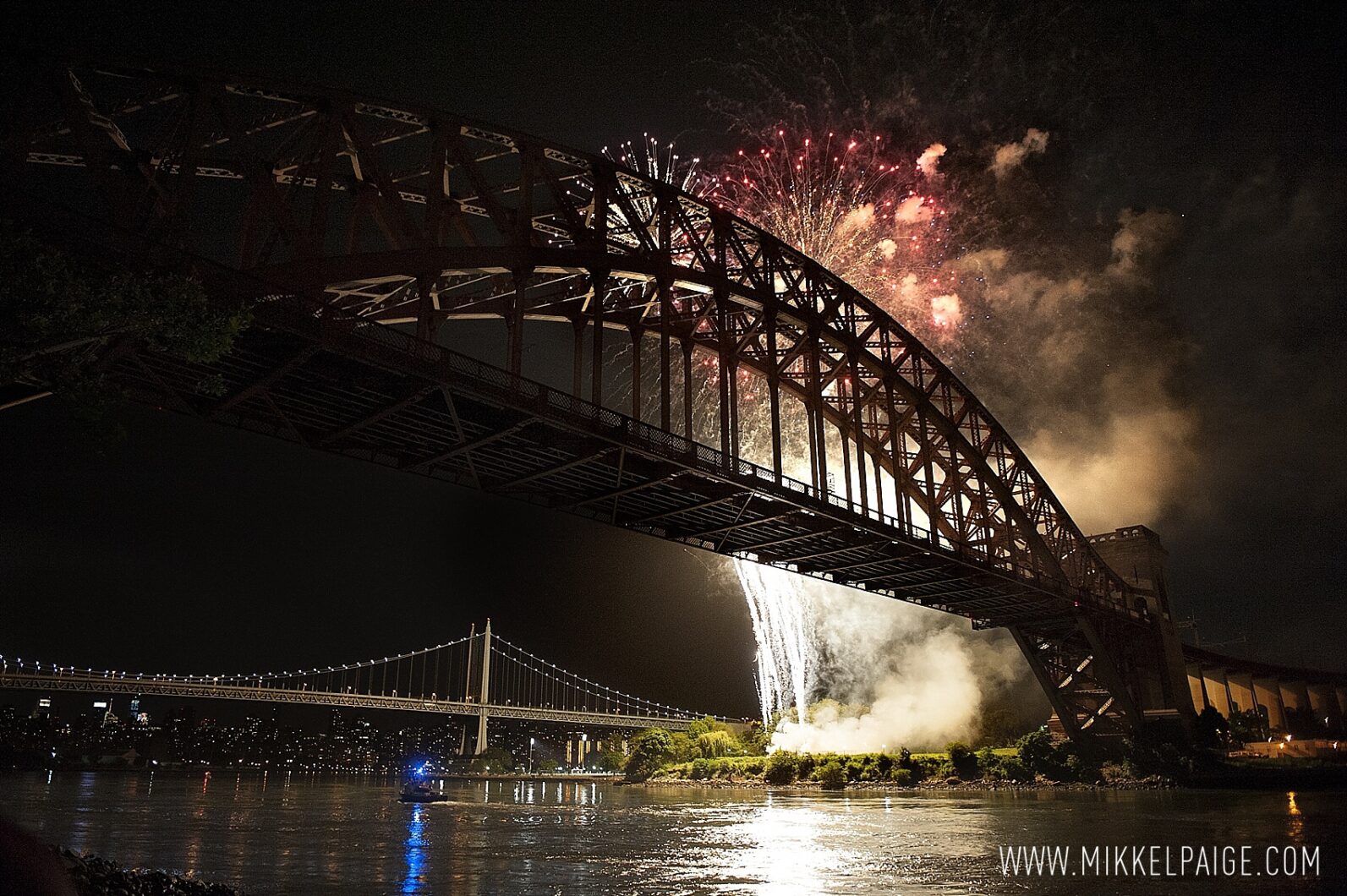 The Fourth of July is great for three reasons:

1) I think it’s pretty significant to remember what July 4th is. If you’ve forgotten, it’s a.k.a. Independence Day for America, when the Declaration of Independence was signed declaring the United States (which was really just the thirteen original colonies at the time) independent from Great Britain.  The U.S. is 238 today! 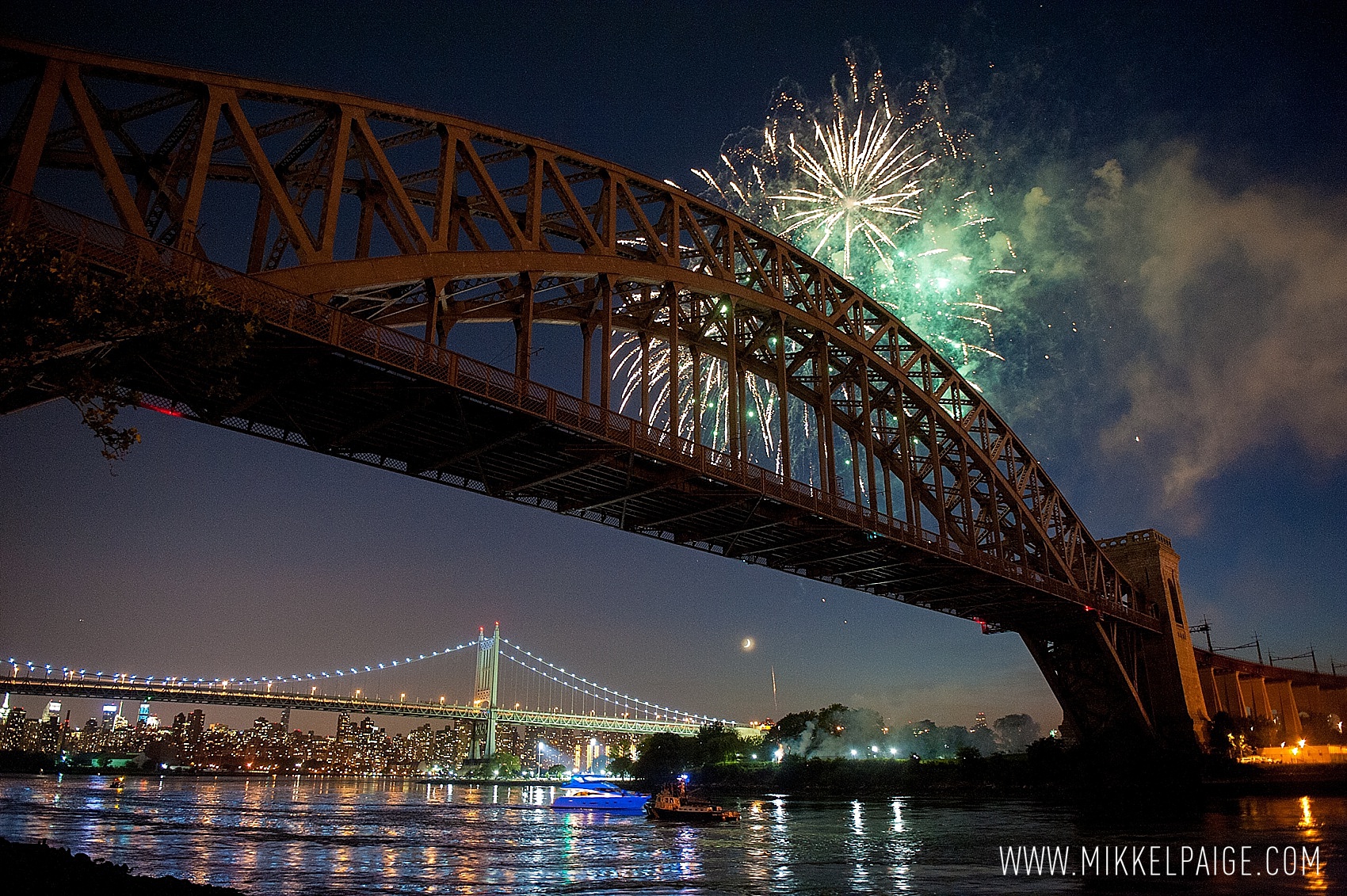 2) I LOVE fireworks! (Have you read my “about” page?) And usually today is celebrated with fireworks, BBQs, and general summer fun. Luckily Astoria, New York had fireworks this past Tuesday as to not interfere with New York City’s Macy’s Celebration of fireworks. These are my photos from this week.

Here are a few tips for photographing fireworks with a DSLR camera (note: tips are for shooting in manual mode):

A) Use a tripod

B) Focus on one initial firework in the distance in the sky then shut off autofocus for the rest of the show.

D) Keep shooting! But enjoy the show too.

E) Remember to compensate for the increased brightness during the show’s finale.

I go into depth about steps A-E below. Please feel free to Tweet to me @mikkelpaige for any additional questions!

A) If you have a tripod, USE IT. If you don’t try to find something nearby like a railing or garbage can for you to rest your elbows/hands on. It’ll help steady the camera as you slow your shutter speed to capture those bright bursts. This is especially key if you have things in the background/scene that are stationary, like the bridges and skyline in my photos. If the camera isn’t steady those stationary things are going to look blurry. 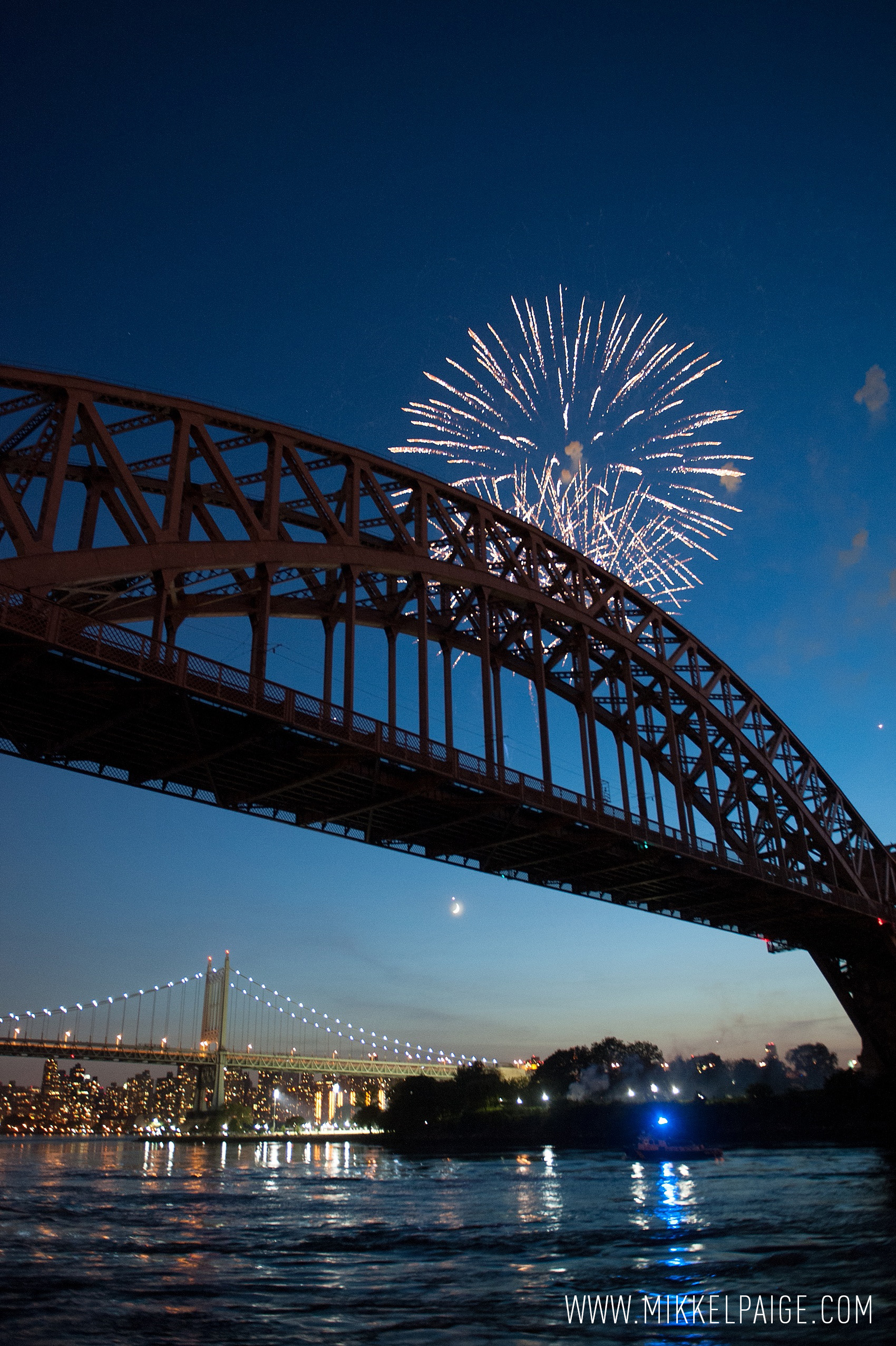 B) If your camera is on a tripod, focus on one of the first fireworks that burst. Then shut off your autofocus. (If you don’t have a tripod, skip this step.) Shutting autofocus will enable the camera to respond quicker for the remaining fireworks. You can also simply “click” the shutter release to snap an image and not recompose or refocus. Since the fireworks are fast you want to have the ability to be fast too. (Alternatively you can leave autofocus on and just press the release button fully to capture the photo immediately, not partially to refocus first. But I do that all the time out of habit so for me, it’s best to shut autofocus off completely.)

C) Camera settings: there are obviously many combinations of the magic triangle (ISO, Shutter Speed and Aperture) that will work. But here’s my preference and what I do with minor occasional adjustments during the show…

(All on a tripod, with a 24-70mm lens. I didn’t feel the need to use a remote to trigger my camera – the shutter speed was quick enough that my finger pressing the camera to take a photo wasn’t shaking it too much.) 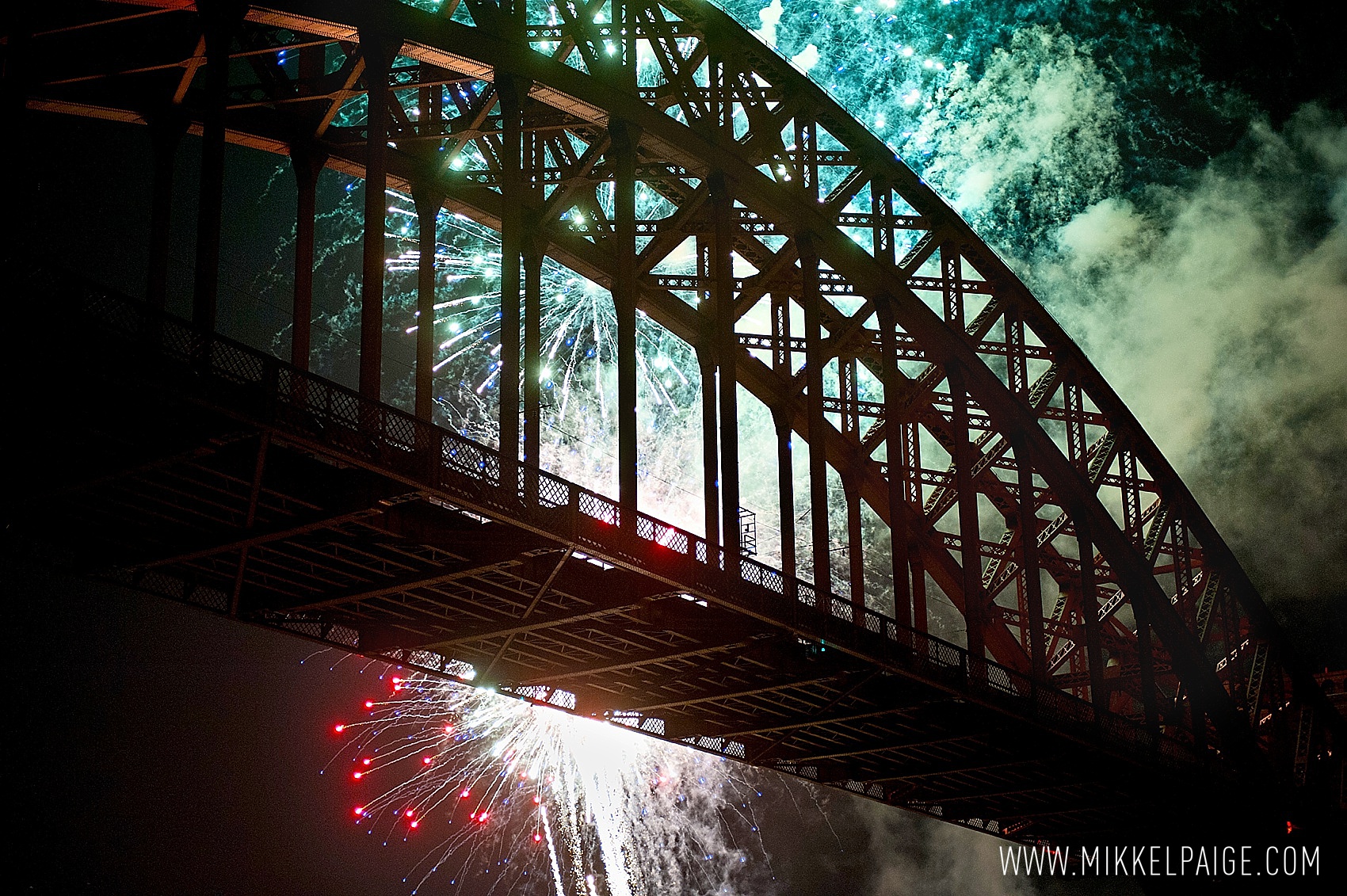 D) Don’t forget to enjoy the show but shoot a lot. I took over 100 images during a 15 minute show. I also had the luxury to do that since I wasn’t even looking in the camera sometimes – I simply composed my shot on the tripod, had my settings in place, autofocus turned off (because in “step B” I had already focused) and snap…snap…snap. You never know which one is going to be AMAZING since the fireworks move FAST.

But again, I kept saying to myself, “Enjoy the show…life isn’t always about capturing the best photo during my leisure time.” Or is it? Haha! (By the way I don’t recommend overshooting in life as a general rule. Simply here, as it applies to fireworks.) 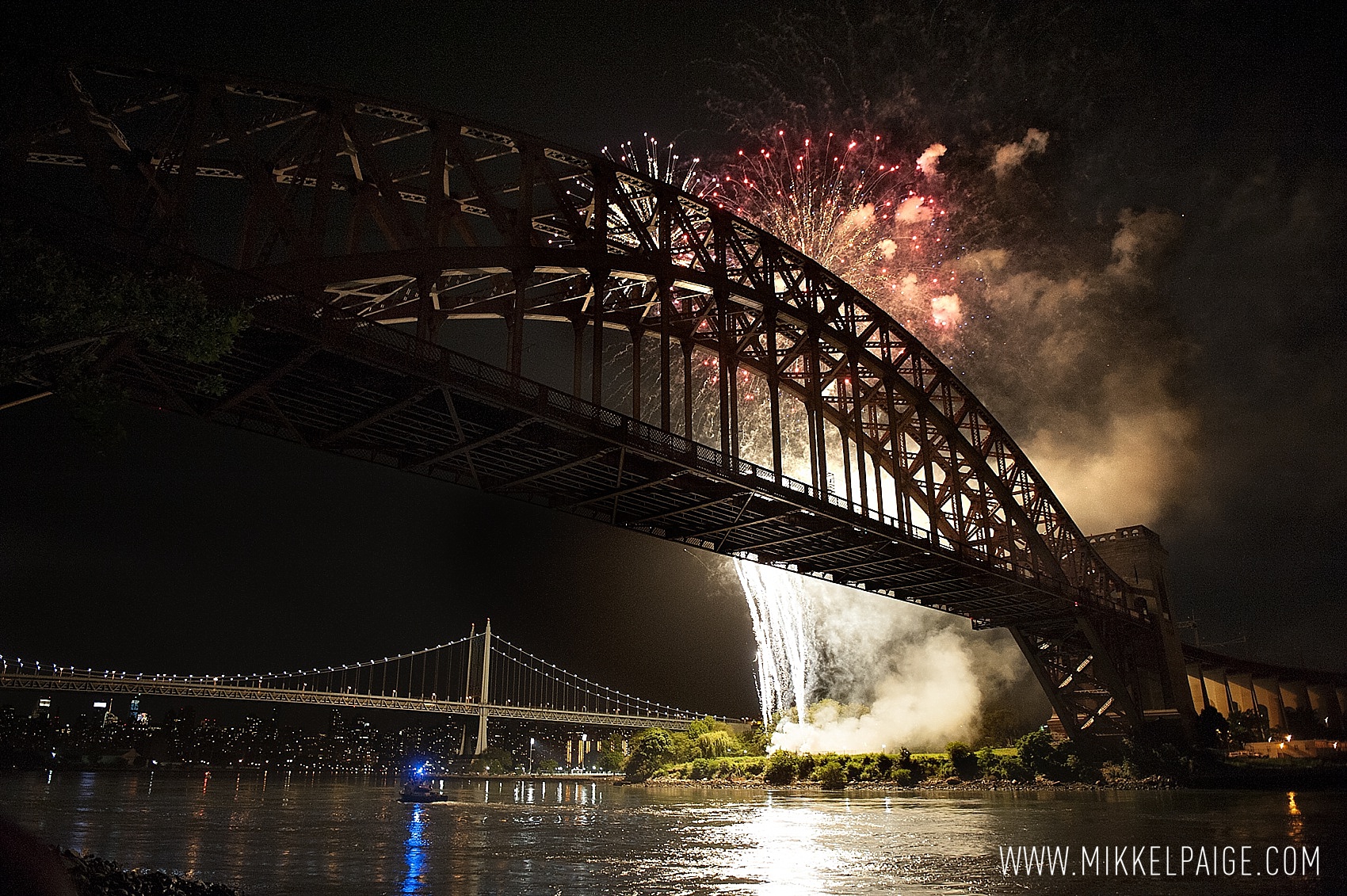 E) Remember that the finale of a fireworks show is typically a LOT of fireworks at once. This means INCREASED brightness…and you’ll have to compensate for this on your camera. I like to do this by increasing my shutter speed. So, for example, if I’m at 1/40 of a second for the rest of the show I want to step up to 1/80 of a second for the finale because the fireworks amount doubles (= increased brightness in the sky).

And last, but certainly not least, my final reason I love July 4th:

3) It’s my nephew’s birthday. And it will always be his birthday today, as he was born on the fourth of July. He’s amazing and I love him so much! Here’s Andrew and me just a few weeks ago. Happy birthday, kid!! I love you! 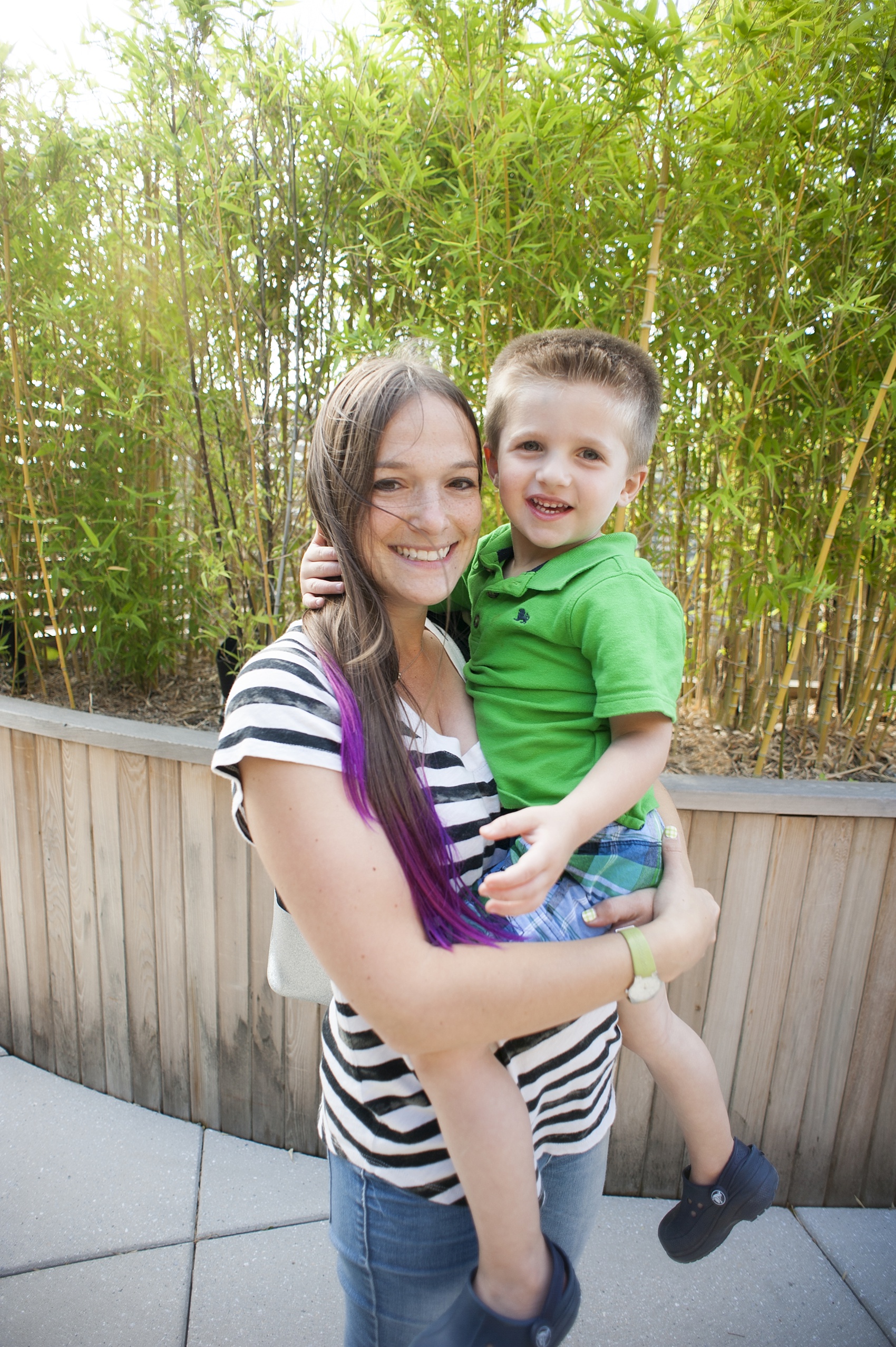 Happy Fourth of July! Be safe and enjoy the holiday!